Last season we had one of the longest winter dry spells I’ve ever seen in the Coast Range of British Columbia. The overall low precipitation, coupled with harsh arctic winds and extended high pressure really beat up the high country. Despite the poor conditions, I’m committed to my home zone and rarely travel to chase snow, so I tried my best to stay positive. I kept riding despite the subpar season, stacking up the resort days, and with some detective work, sniffing out the hidden pockets of goodness in the backcountry. The challenging winter also helped me change my perspective on where to ride and opened my eyes to some new lines.

The curse was finally lifted in March when a few small storms hit the Coast Range and began to reset the haggard alpine snowpack. The next high pressure that came through a crew of motivated friends and I - Delaney Zayac, Brad Slack and Joel Loverin - headed out to one of our favorite zones, hopeful some of the big lines might be in condition. We camped at the end of the logging road and set out into the high country each day for some long awaited adventure boardin’. 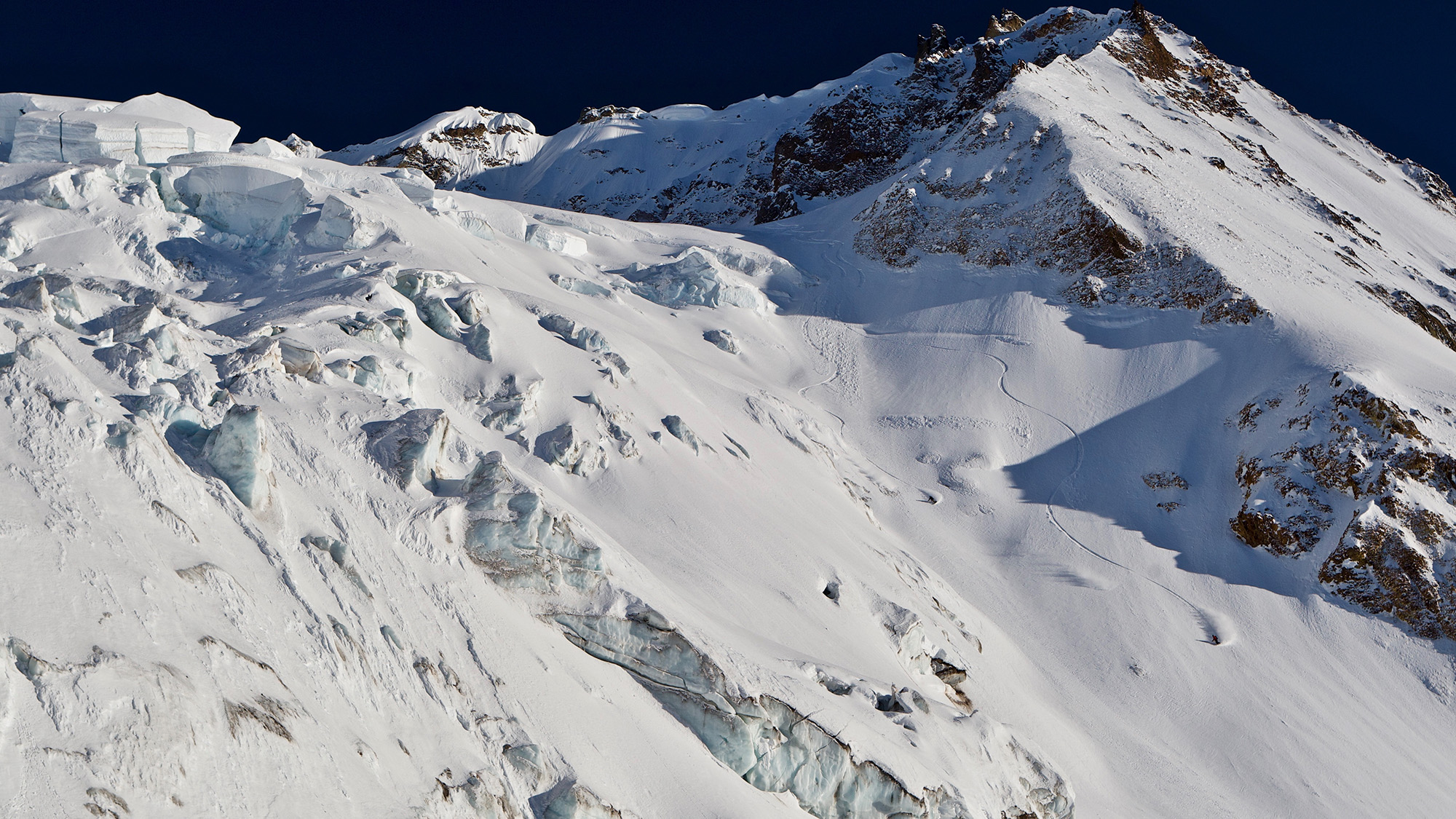 As expected, the snow quality improved dramatically with elevation. Thankfully the high alpine had stayed cold despite the unusually warm weather in the valley and as we climbed higher a land of steep spines and cracked ice emerged. We started off the trip by sizing up stability and conditions on smaller terrain. It’s critical to first assess avy danger on smaller terrain before moving to the bigger terrain, so we looked for easily accessible high points with clean runouts. After a long dry spell we knew that the fresh snow might have trouble bonding to the old weather worn snow. Before the storms, some aspects were covered in surface hoar and some aspects were sun crust, both of which are red flags for dangerous conditions when covered by a layer of fresh snow.

Sure enough, we got some pockets to bust loose on our test slopes. The slabs were mostly running on the sun crust. We managed this with terrain selection. We avoided any solar aspects and stuck to true north facing terrain that was showing much better stability. Time is also the best healer of instabilities, and eventually the solar aspects did stabilize allowing us to step up to more exposed lines later in the trip. 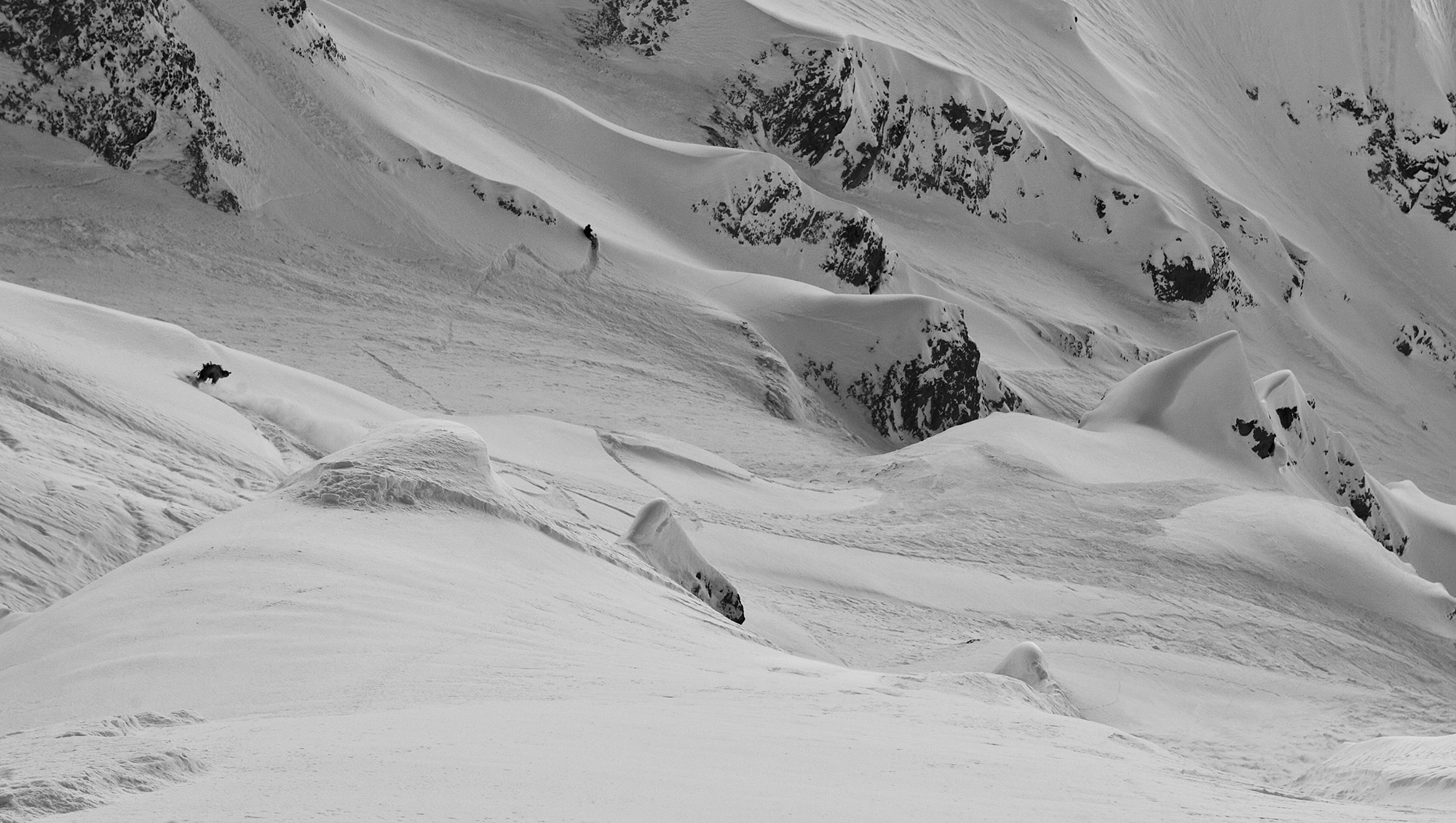 A few days in we decided it was go time on the biggest peak in the zone. That meant a 3:00 am start from camp and climbing in the dark. Firm melt freeze snow made for quick travel up the backside of the behemoth mountain and we arrived on the summit ridge just after sunrise. Views of the biggest and deepest monsters of the range came into focus from the flat summit ridge, eye candy for miles and miles! But first we needed to focus on the task at hand, the line we were about to drop into demanded full attention. Having ridden the line before I knew what to expect, but you can’t help but feel a little nervous before dropping into a 7000-foot plus line of gnar. 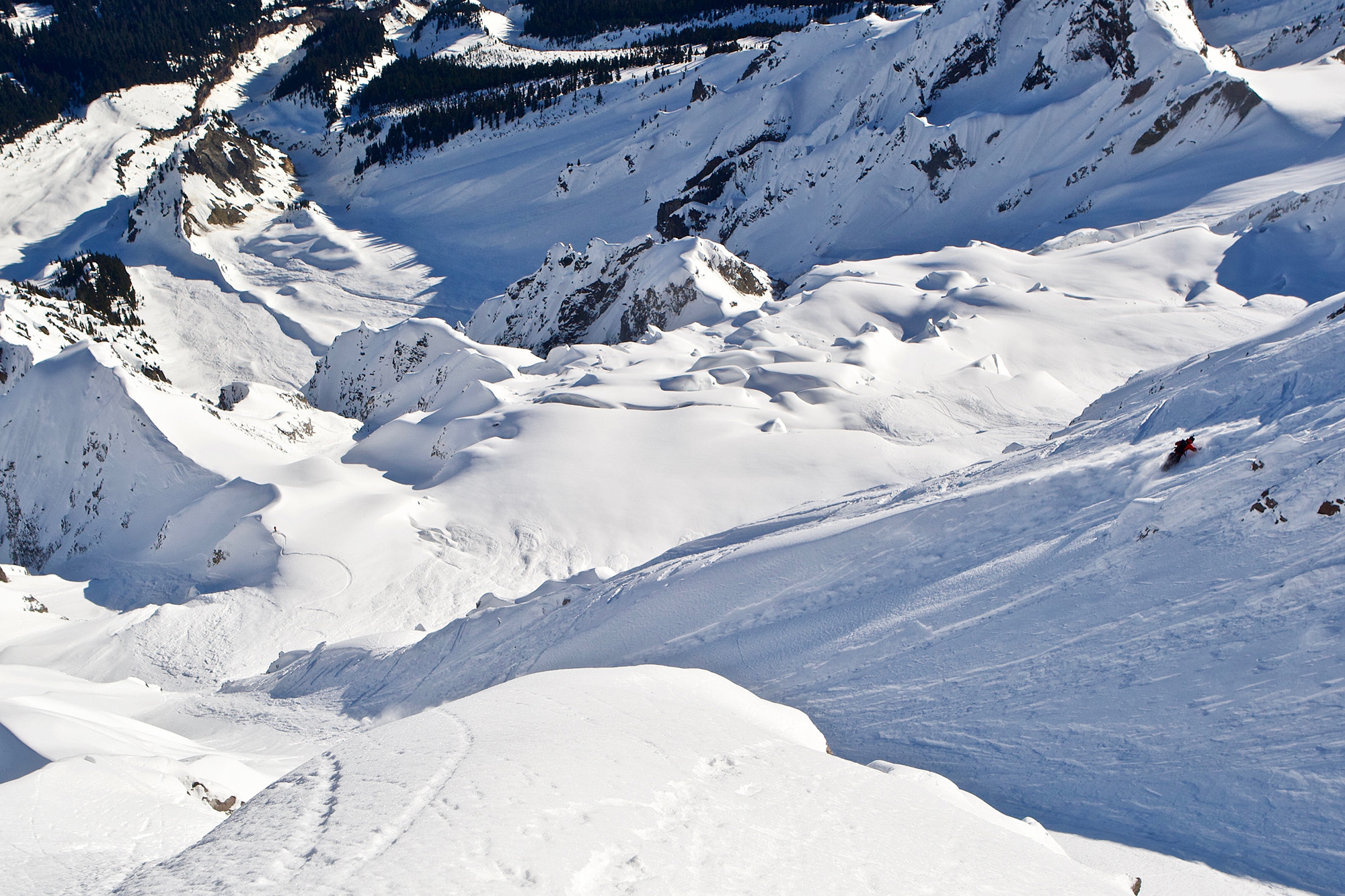 The ribbed out line was NE facing, fully lit and looking glorious in the morning sun as we dropped in. There was quite a bit more exposed rock on the line than I’d seen before, and some small pockets of windslab, so we made a slow cautious descent, leap-frogging each other from safe zone to safe zone. Despite the few hazards, everyone made it down safe and we found some really fun sections to ride.

The low snow year in the Coast Range also meant there was a lot more exposed glacial ice and crevasses than usual. Towering seracs were falling from the faces and there were gaping cracks in some of the glaciers that closed off our previous access routes to some lines. Riding above huge bergshrunds and crevasses was not worth the risk, especially when we were not 100 percent certain of the snow stability. Riding in this type of terrain is serious and a mistake could have heavy consequences if you play it wrong. 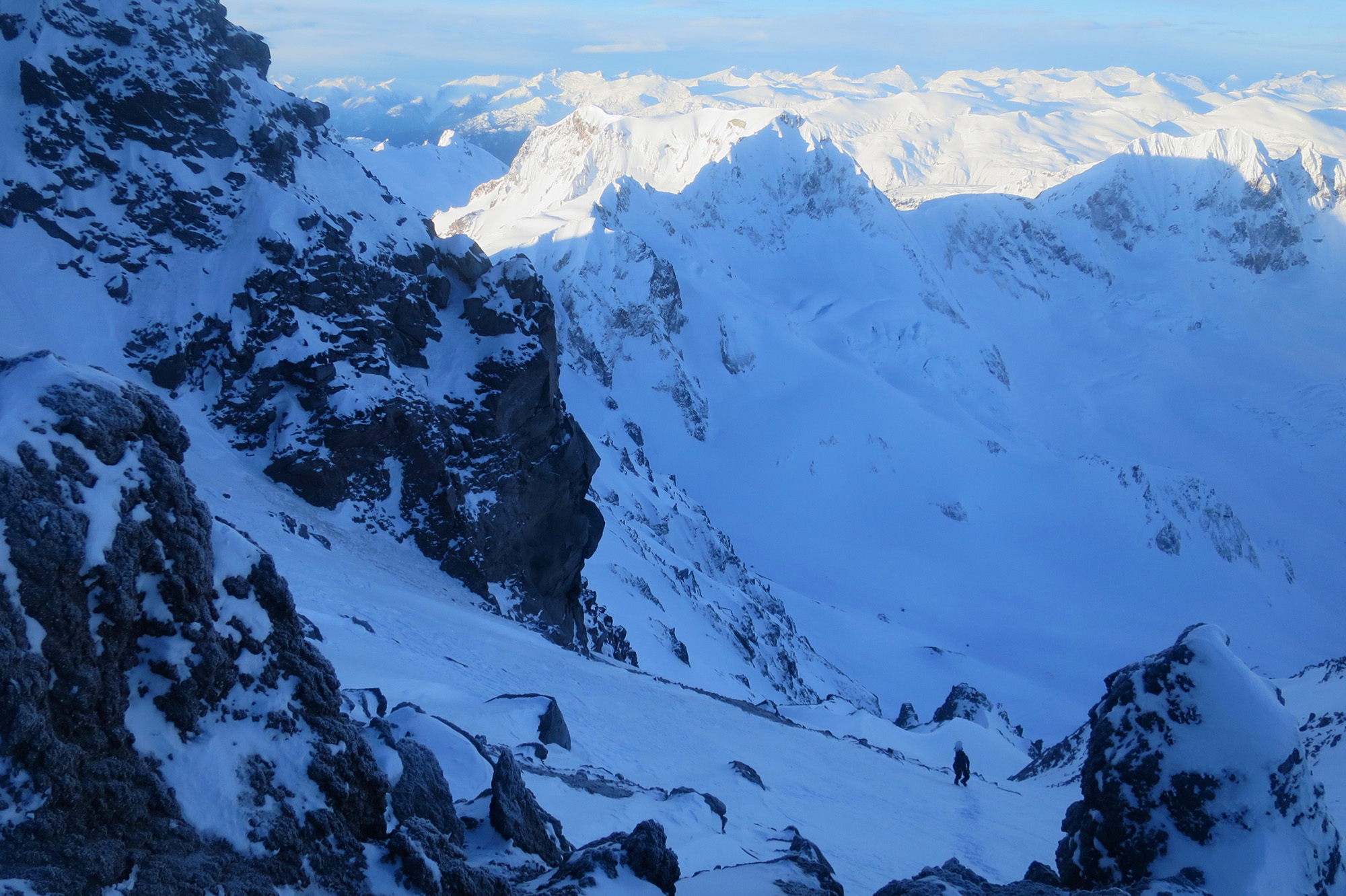 Shut out from riding a few gnarly beasts we had scoped on the trip, we took a different approach and sought out smaller, sheltered terrain. Not only did we find the best snow in the smaller terrain, but I got to shred some of my best lines of the season, lines that I have bypassed in the past. It’s amazing what you might overlook when you only have your eyes on the biggest thing out there. Having goals and objectives is important, but with age and lessons learned I know when it’s time to call it or just change focus. And accepting the conditions still allowed me to find that feeling I was chasing - getting off the grid and snowboarding in a wild place with friends. 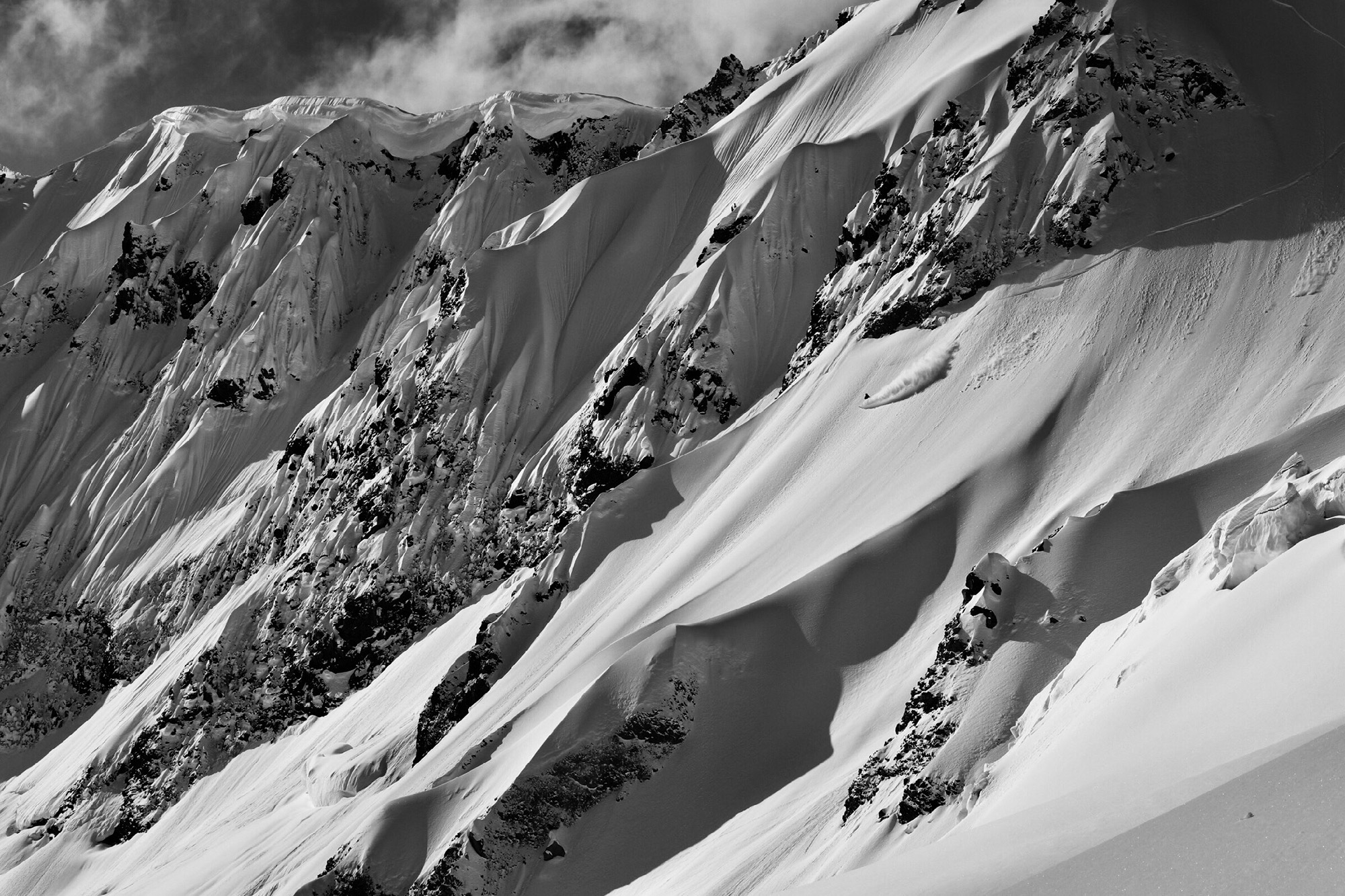 Much of the terrain we were exploring on this trip I had first visited with my late friend and longtime mountain partner, Dave Treadway. Dave was a legendary Coast Range ski mountaineer and explorer, and his skill, motivation and curiosity taught me a lot of what I know about how to travel and ride in my home range. Dave’s ability to dissect complex objectives put him on top of many un-skied summits, and I was lucky enough to join him many times. I now think of him often when i’m in these wild places, the trails he blazed, and his humble approach to exploring the mountains. In his memory, this story is dedicated to him. Thanks for everything Dave. 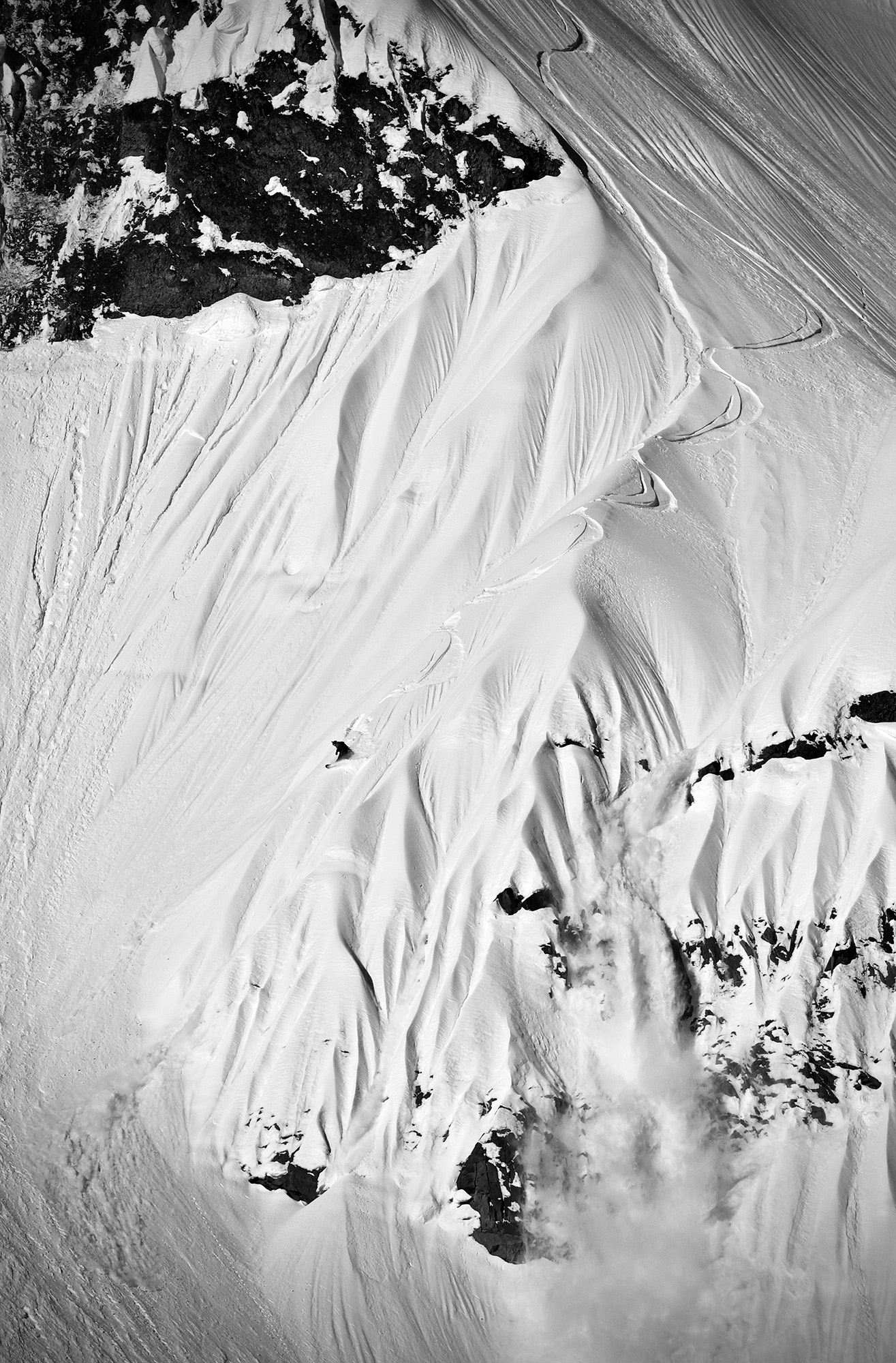