In June 2019, Graeme and a crew of friends used the grant to help fund a four-day traverse of a remote section of the Northern Absaroka range with the goal of riding Sunlight Peak. They were met with variable summer snow conditions and crossed tracks with several grizzly bears, but their trip was a success as they rode lines on Sunlight Peak in perfect weather and safely completed their traverse without getting eaten.

Watch the video trip report by Chet Stefan and read Graeme’s trip report to get inspired to start working on your application for the 2020 Jones Adventure Grants. The application window closes December 1st, 2019. Apply now!

From the top of the Beartooth Highway in Montana, Sunlight Peak is one of the most prominent faces visible. I’ve spent countless days around the region exploring some of the more known peaks, and every time I stand on a new summit my eyes are drawn to Sunlight Peak. Because of the remote location, fear of grizzly bears, and my school and work responsibilities, it was hard to wrap my head around the time commitment and logistics it would take to go explore Sunlight Peak. There was also very little documentation of the peak to be found anywhere online. Making the push out to Sunlight would be a push into the relatively unknown. Winning the Jones Backcountry Adventure Grant was the perfect excuse to erase any doubt and just go for it.

My friends Chet Stefan and Jack Johnson joined me for the adventure. The four-day traverse we set out to do would involve hiking, wading, skinning and snowboarding from Sunlight Creek near Chief Joseph Scenic Highway in Wyoming to the North Fork Highway near a little ski hill called Sleeping Giant Mountain. The traverse would total around 30 miles with multiple raging creek crossings and a pass crossing over 11,000 ft. Needless to say, it was quite the adventure! Here’s how it all went down… 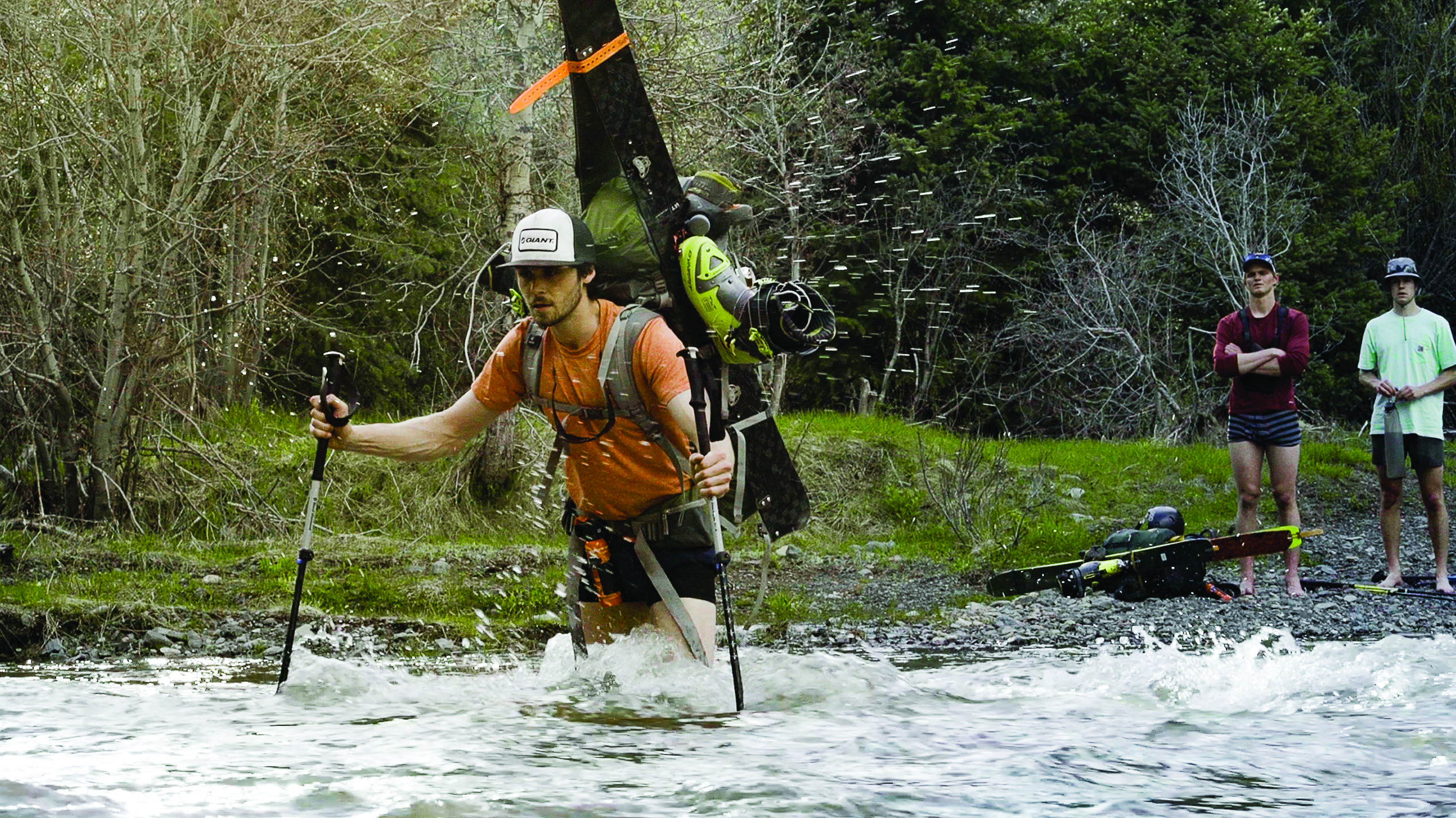 The trip started with a beautiful drive into the region. Eventually the pavement turned to dirt and ended in a large gate restricting motor vehicle access. At about 6pm, we started the long walk to snow line. A couple miles in, a mandatory creek crossing left us shaken up and wet as the light began to fade. With camera gear and our sleeping bags in our packs, falling in would have ended the trip prematurely. Three more creek crossings and 6 hours later, we had made it a significant ways into the drainage and decided to set up camp for the night. We followed huge grizzly tracks for the majority of the way in and these massive creatures were certainly on our mind as we drifted into our short but much needed sleep. 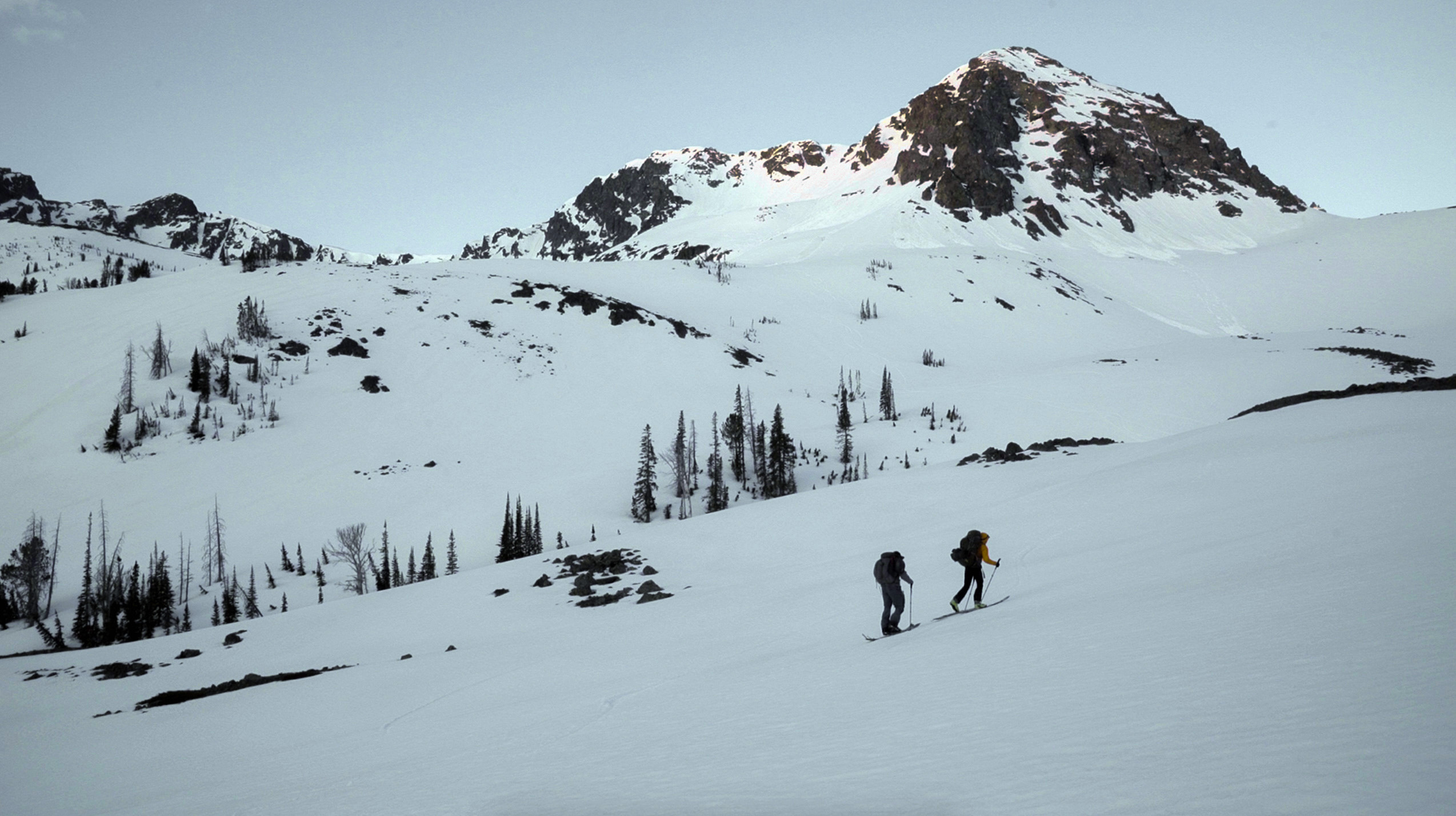 A 4am start left us feeling groggy and tired as we made the short trek to the base of Sunlight. It was clear that the temperature had not dropped much below freezing as our boards sunk into the half frozen snow. As the sun rose and the views of the face gave way, we saw the upper parts of the ridge line had slid from the previous weeks warmer temperatures. It was clear making it to the summit was going to prove challenging, if not impossible given the technicality of the terrain. After hours of skinning and booting, we ultimately decided not to proceed to the summit as we had miles between us and any form of aid and a fall would have left us mangled. The turns off the ridge line were choppy as we made our way through the slide debris. The lower elevation slopes down the glacier, unaffected by the slides, were smooth and the turns were rewarding. We returned back to camp mid-day tired, but with a feeling of accomplishment. I couldn’t help but feel slightly disappointed that we were not able to ride the line from the true summit, however, making it home in one piece is always the ultimate goal. It was hard to stay disappointed as we looked at the vast peaks surrounding us. The rest of the day was spent gathering water, refueling our bodies and getting ready for the next two days as we knew they were going to be long. 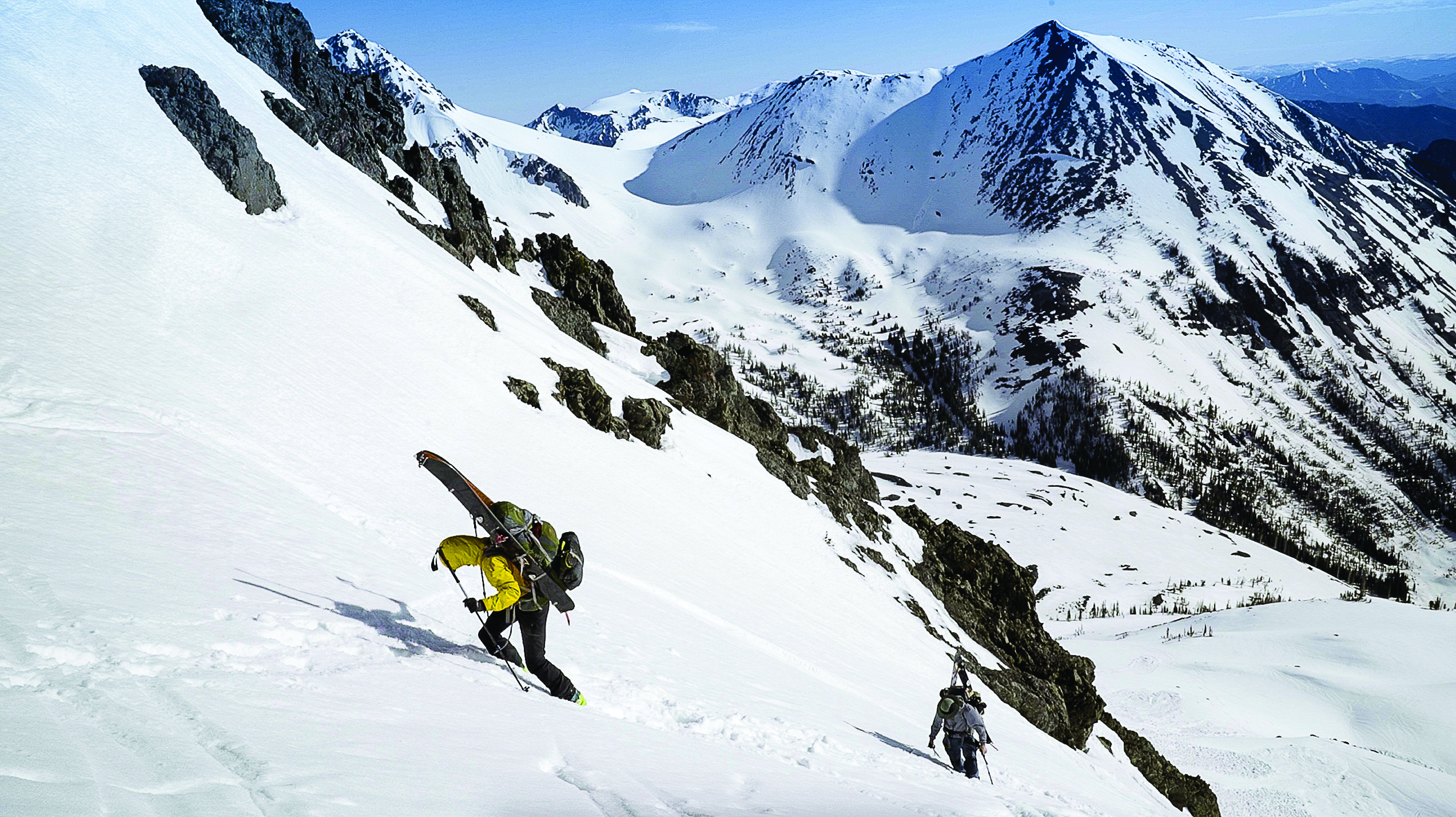 Another 4am start coupled with the frantic packing of camp left us cold and eager to get moving. Following the same skin track from the day before, we quickly made our way to the lowest part of the ridge bisecting the Sunlight drainage and our path towards the highway. With 50 pound packs, we made slow work of the boot pack, but eventually crested over the ridge line and dropped into the next drainage. It felt like a new world as the now familiar peaks of Sunlight and Stinking Water were left behind. As we rode into the bowl, views of endless couloirs, big faces and even bigger cornices filled our eyes. Another long boot pack put us on the ridge we needed to follow to drop into the final creek drainage that would take us to the North Fork Highway. The mushy unfrozen snow made travel difficult, but because of cloud cover and a cold wind, we felt all of the slopes were not susceptible to more wet slides. After a long walk on the ridge, we came to a steep face with rollovers making it impossible to see what obstacles and terrain we were faced with. A cautious descent navigating cliff bands led us to Grinnell Creek where we used the remainder of daylight to start making progress on the 13 miles of thick forest that lay between us and the road. 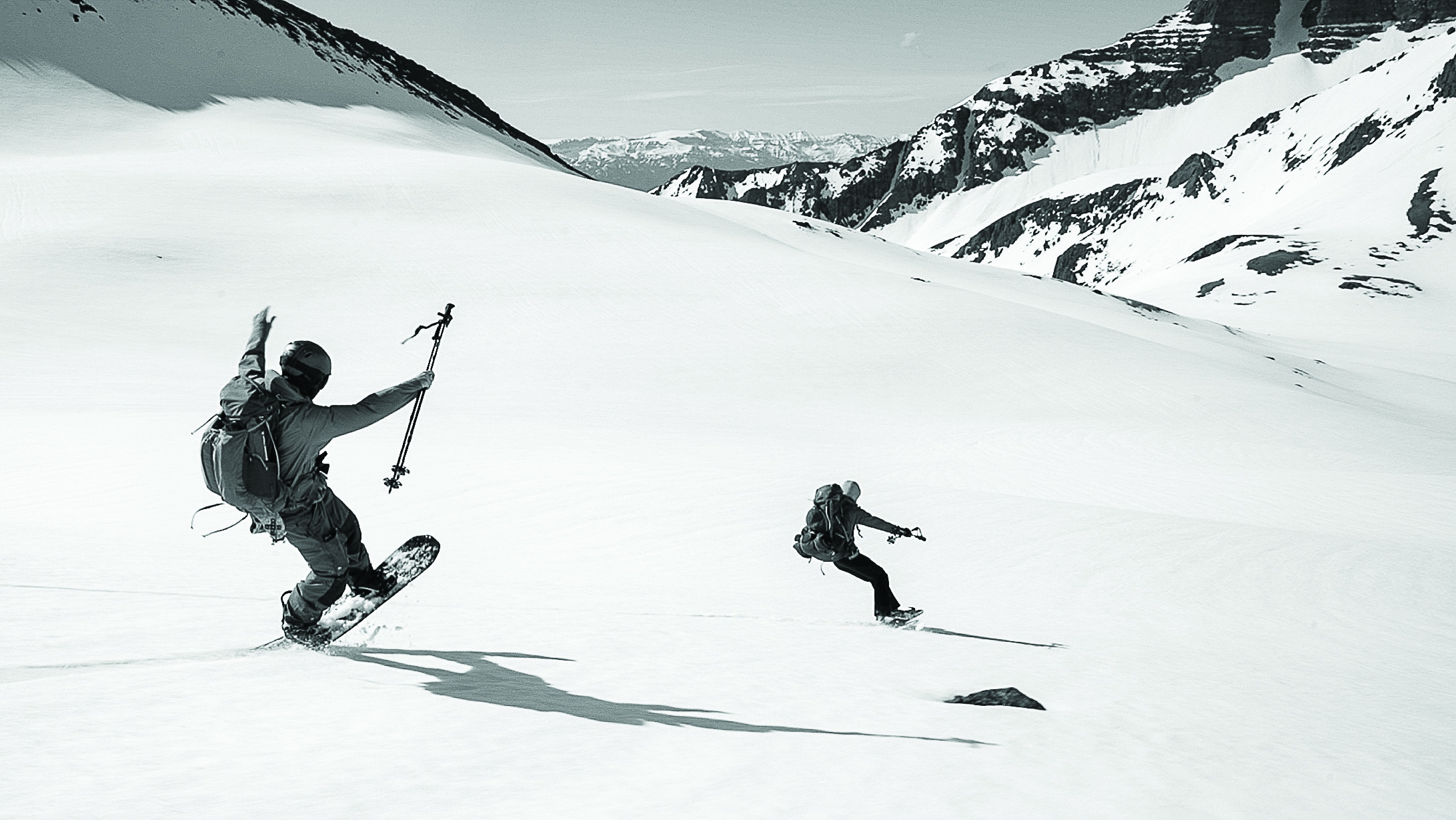 Our alarms were set for 5am, but we did not leave camp until 7am. The thought of putting our feet into soaking wet, and now frozen, boots kept us huddled in the tent until well after the sun had risen. This day was arguably the most mentally taxing as we transitioned from walking to split-skiing and back countless times depending on the aspect of the drainage. After traveling only two miles in the span of four hours, we started to get discouraged. Thoughts of trying to float down the river seemed tempting, but after feeling the water temperature, we quickly ruled it out. After hours of self-deprecating humor and delirious conversation, the snow gave way to a faint trail and we decided to give up our snowboard boots for our trail runners. After four more miles of post holing and navigating enormous avalanche debris, we found ourselves at the road. The stars aligned and my girlfriend picked us up not 5 minutes after. Ecstatic at having finished the traverse, we set out back to Bozeman with a pitstop to eat absurdly long sandwiches in Cody, WY. 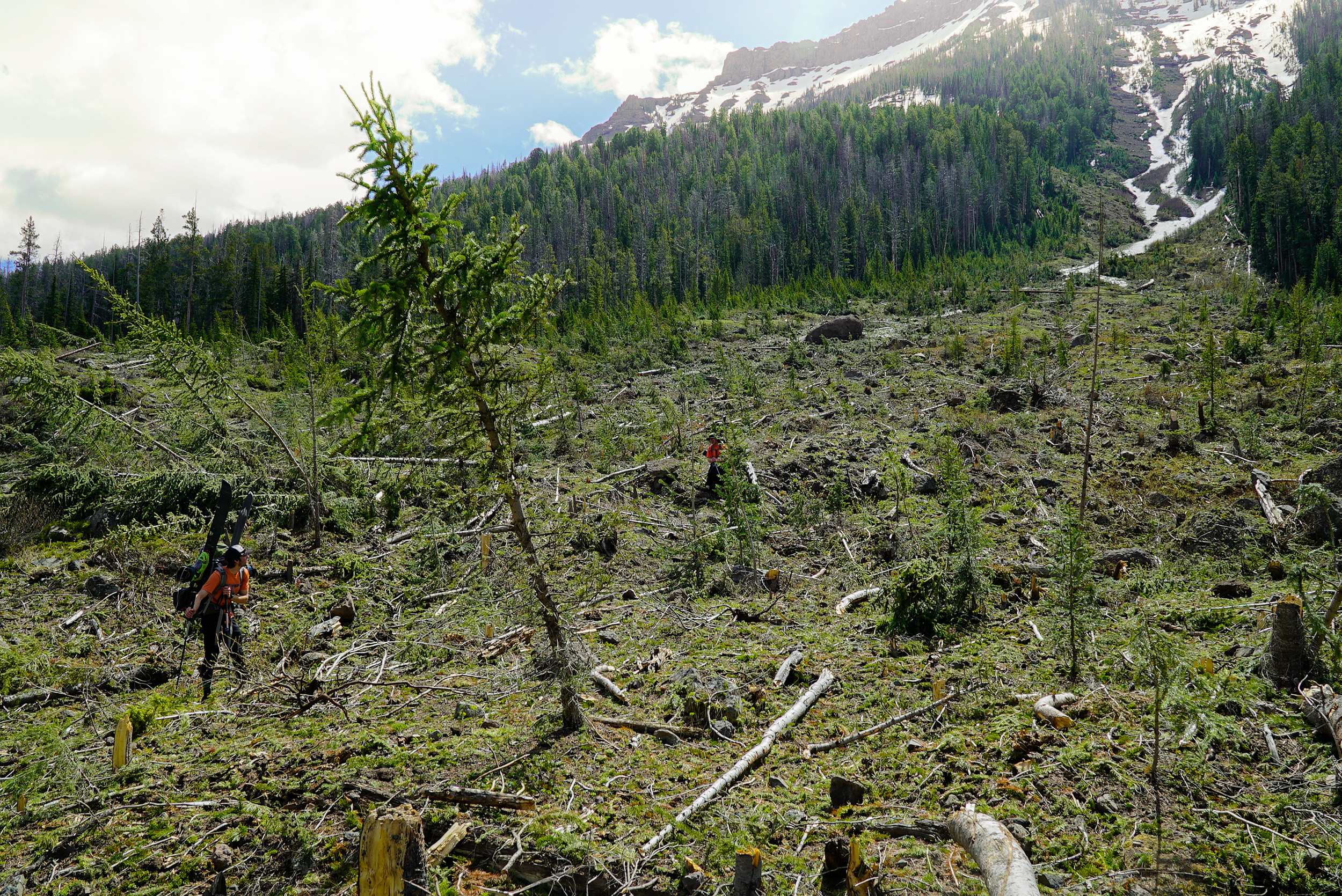 The opportunity to explore the landscape and terrain in the region was a truly humbling experience. So often I feel I need to travel to far away places to get the experience of wild and new places. This proved to me, especially in Montana and Wyoming, that there are lifetimes of lines to ride in our backyards. We will definitely be returning to the area to ride a line off the summit, as well as a bunch of other lines we scouted on the trip. For anyone thinking of checking out a new zone with little to no information, my only advice is to go for it. You truly don’t know until you go. Things did not go as planned, but being in the mountains with the people I love was far greater feeling than any summit could bring. A good attitude and humility were a big part in overcoming the heinous travel conditions in what we deem as a successful trip. A huge thanks to Jones Snowboards, the American Alpine Club and everyone else in the backcountry community for inspiring us and making this possible. 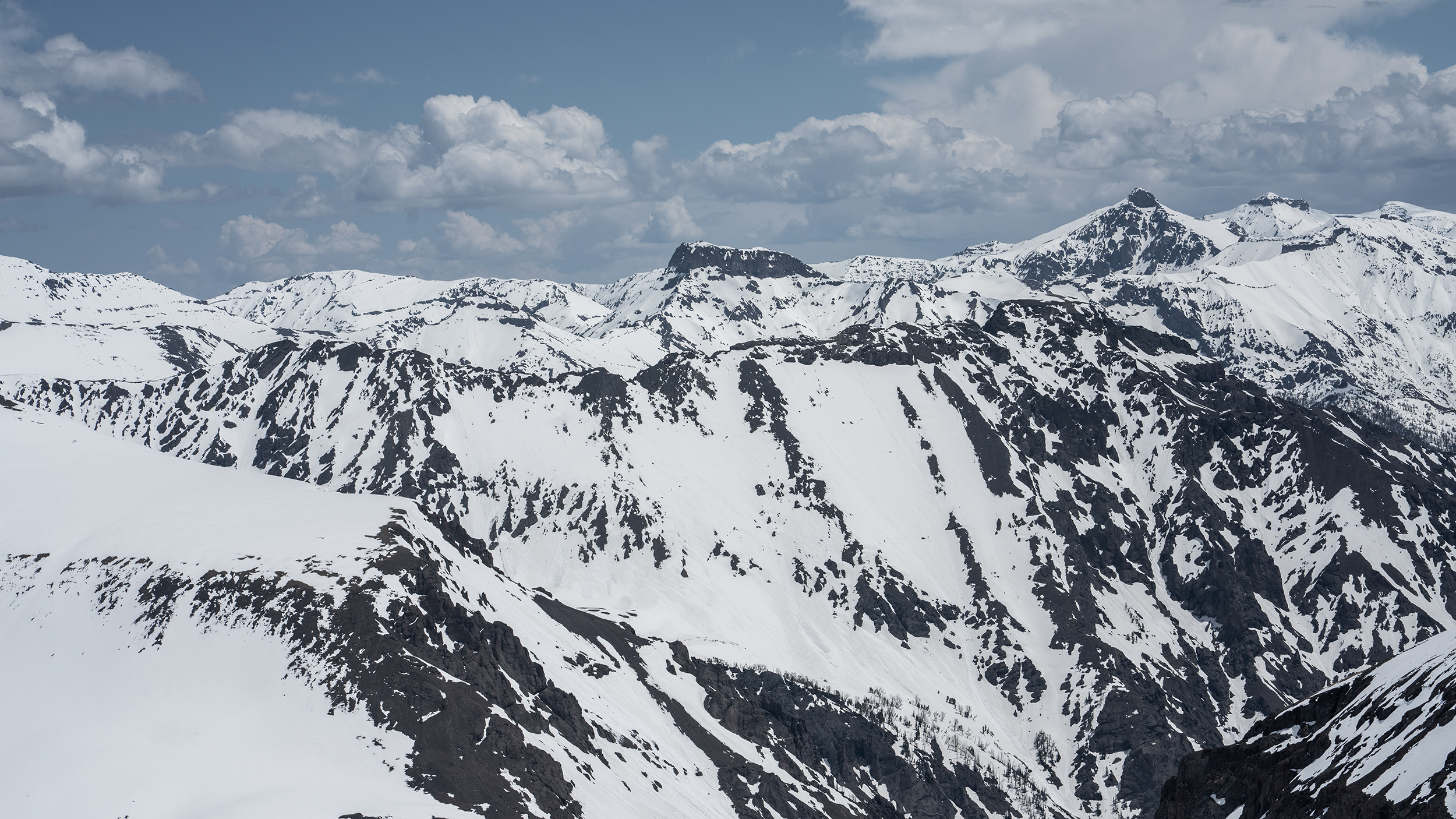