RP Roberts in front of the mural he painted at the Jones ISPO booth in 2016. Photo - Marc Sixto/splitboardmag.com

The bright colorways and bold textures of UK artist RP Robert’s mountain landscape paintings jump off the canvas and immediately attract your eyes to their rich hues and striking mountain features. One look at RP’s art and his signature style and we knew he’d make the perfect Jones snowboard graphic artist. His art captures the essence of the mountains we cherish with a color palette that pops hard, yet maintains some natural subtleties.

RP painted the graphics for four boards in both our 2017 and 2018 lines. We’ve heard relentless praise from around the world for the art featured on these boards so it’s high time to introduce all of you to this amazing man, who to no surprise, is also a 20-year veteran shredder. Read on to get to know RP and hear the inspiration for both his signature style and the paintings featured in our 2018 line.

RP sketches a custom Jones logo featured on a tee in the 2018 line.

When and how did you learn to paint?}}

I’ve always drawn and painted from a young age. I started by copying cartoons and trying to create my own. Art was the only subject I was really engaged with at high school. My father was also an art teacher, so I was used to being around art and artists outside of school as well.

I was also fortunate enough to grow up in a town that had a really healthy skate scene in the 80’s and 90’s. This meant there was also a very healthy graffiti scene that built up around painting the concrete skate bowl. I was instantly drawn to the graffiti side of things and got super into exploring letter styles and the more abstract side of graffiti. Without realizing so at the time, those late night painting missions in the city had a huge influence on the mountain artist I am today.

What was your introduction to the mountains?}}

I grew up on the edge of Snowdonia in North Wales. My family and I would often head off in to the mountains on the weekends. I was also fortunate to go on walking holidays to the Bernese Oberland in Switzerland as a kid. Walking in the shadow of the Eiger and exploring the peaks of that region blew me away and was also a huge influence. My father used to sit and draw the mountains around us when we stopped to eat lunch. I was always in awe of him being able to document our surroundings.

What inspired you to start painting mountains?}}

I got really involved in the UK graffiti scene and was asked to instruct some youth graffiti workshops over in Bad Ischl, Austria. We were given a spot to paint by the mayor, as long as we incorporated some sort of Austria elements. I painted a graffiti letter piece with a mountain range as the background. That peaked my interest in drawing and painting mountains. For the next year or so I started sketching and painting mountain pieces and posting them online under an instagram profile that had no connection to my usual graffiti social media accounts. I just wanted to see if there would be an interest in my landscapes away from my friends and families input. I had a great response, and started to get people asking for commissioned pieces. 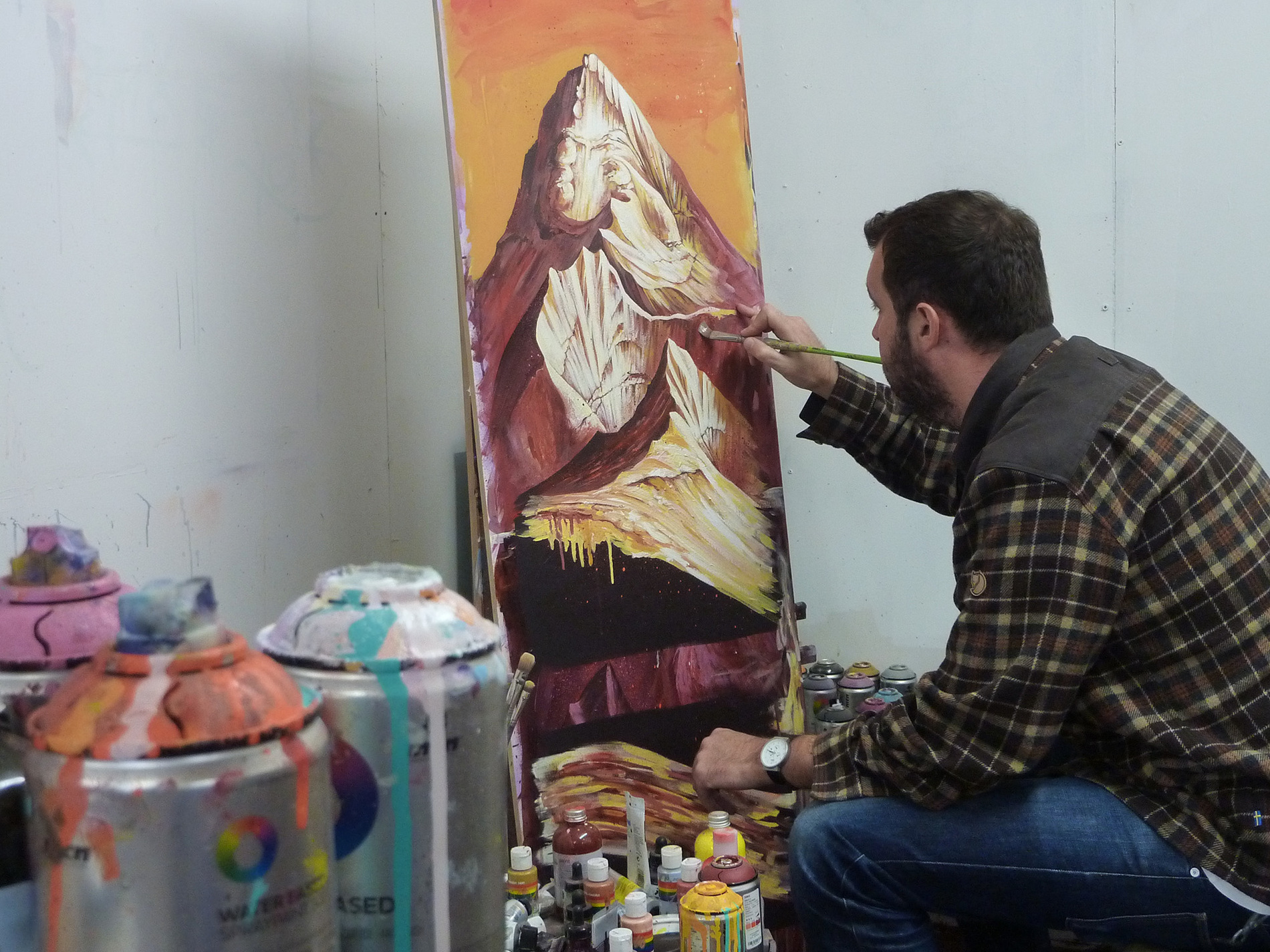 RP puts the final touches on a painting at his studio in Manchester, UK.

What inspires the imaginative colorways of your landscapes?

I have been painting using aerosol for a while, so i’m used to using brighter colors and trying to push weird color combinations. I try to transfer some of those graffiti colorways to landscape painting, while also incorporating drips and paint splatters.

Where did you learn to snowboard?

I learned to ride in Chamonix in the mid 90’s. A group of us decided to go on a road trip from the UK and at the time there was a huge crew of Brits seasoning over there. We didn’t realize that Cham is one of the most gnarly regions in the Alps and not the best for beginners. It was a true ’in at the deep end’ experience and we had the worst gear, but also had the best time! Following that I spent the summer saving and managed to get enough money together to do three months in Tahoe the winter of 99. I lived near Homewood with some of the K2 snow team. What a winter that was!

How do you capture the details of mountain landscapes to later translate to the canvas?

When I’m riding, I’ll take photos to use later as a reference. If I’m somewhere other than a snowy environment, I’ll get out the sketchbook. I think if I got the chance to ride more i’d be more inclined to spend a lot longer time drawing in the snow, but lately, as soon as I get on snow all I want to do is ride.

What was the inspiration for the Dream Catcher graphic?}}

With the Dreamcatcher, I wanted to try and capture a peak in the United States that was recognizable and had depth in it’s appearance with some interesting ridgelines and faces. I found an awesome shot of Denali that I thought would work well for the full length of the board, while still highlighting Denali’s incredible silhouette.

What was the inspiration for the Mountain Twin graphic?

After creating the Matterhorn painting for last season’s Mountain Twin, I wanted to create a similar painting, but of a peak in the United States. After speaking to Jeremy about which peaks would be suitable, we decided upon ’Pontoon’ as it’s such a recognizable silhouette and it’s in an area of Alaska that Jeremy has explored in depth. It was then a matter of finding a view of Pontoon that I could incorporate some ridgelines in the foreground to give it some depth and some more interest when mirrored.

What was the inspiration for the Twin Sister graphic?

For the Twin Sister, I wanted to paint using a bright colour palette to make the most of the semi-transparent print process. I also wanted to try and create a more jagged and extreme looking range compared to the previous seasons graphic. I looked at lots of shots of some pretty crazy looking ridgelines and peaks in AK as inspiration.

Beyond snowboard graphics, what are your other outlets for your art work?

Away from the snowboard graphics, I mostly paint commissioned landscapes for private buyers. I enjoy the process of working with people to create a painting just for them. I’ve also created some pieces for Protect Our Winters, that they have used for greetings cards and T-shirts. It’s been awesome to align with such a great charity, and create some art that will hopefully help them raise awareness and funds for the fight against climate change.

On the complete flip side of mountain graphics and paintings, I also occasionally work with youth groups helping them paint graffiti murals in their schools or youth centers. It’s great to help get kids engaged in art and see them get excited about using a new medium.

How does one commission a painting from you?

You can visit my website at www.rproberts.com then drop me a line via email. I usually start by discussing which area or mountain you want painted, then discuss size, color and composition. It’s an exciting process and I really enjoy developing pieces in conjunction with people. Though I do get asked a lot to create ’surprise’ pieces for customer’s partners or family. Always honored to have so much input into the creation of such a unique and special gift.

Any tips for the aspiring landscape painter?

I think with any type of art form, it’s best approached out of a love for the process. If you can enjoy the exploration of the subject and even the materials you use, then you’ll eventually end up with something your happy with. And like all skills in life, the more you practice and the more you engage with the process the better you’ll get. So yeah, draw, draw, draw, paint, paint, paint and don’t be afraid to try new mediums and mess up. You’ll always take something positive out of trying something new and making a mistake.