Thrilled to present a trip report from the 2018 Jones Ambassador Adventure Grant expedition! In 2018 we awarded the grant to Jones Ambassador Harry Kearney to help fund a unique sailboat based trip to a remote zone on Canada’s West Coast. Harry and fellow Pacific Northwest shredders Timmy Taussig, Jerry Mark and Jann Eberharter loaded up Captain John Taussig’s sailboat with splitboard gear and sailed north from Bellingham, WA to seek their fortune exploring wild terrain in the Jervis Inlet. Check out Harry’s full report from the adventure below including a trip highlight video + photos by Jann.

The sound of Captain John’s feet stepping aboard the boat woke me at around 4:30 am. My three closest riding partners and myself had gone to the Bellingham Marina the night before to sleep onboard Lucia, John’s 38-foot full keel Alajuela sailboat. John’s pre-dawn arrival marked the signal for our departure. Our destination for the next week lay about 170 miles to the north. The plan was to sail from Bellingham, Washington up the coast of British Columbia into a narrow waterway surround by mountains called the Jervis Inlet. Once parked in the deepest arm of the inlet, we planned to hike up into the alpine and explore the wild terrain hanging above the water on our splitboards.

One of the most unique aspects of the Pacific Northwest is the close proximity of the ocean and the mountains. With the mountains so close to the sea the relationship between them is much more obvious and intimate. That relationship is what inspired the idea for our trip; to combine an ocean element with our snowboarding adventures. Captain John and Lucia had arrived in Bellingham a few months prior, and after a few sails with our crew, the conversations trended towards sailboat accessed snowboarding destinations. When John came back from a sailing trip to British Columbia with some snow sightings, the possibility became much more real. Our dreams of embarking on a sail/split trip that next spring became my proposal for the 2018 Jones Ambassador Adventure Grant. Getting awarded the grant sealed the deal, and after months of planning, the time had finally come to push off! 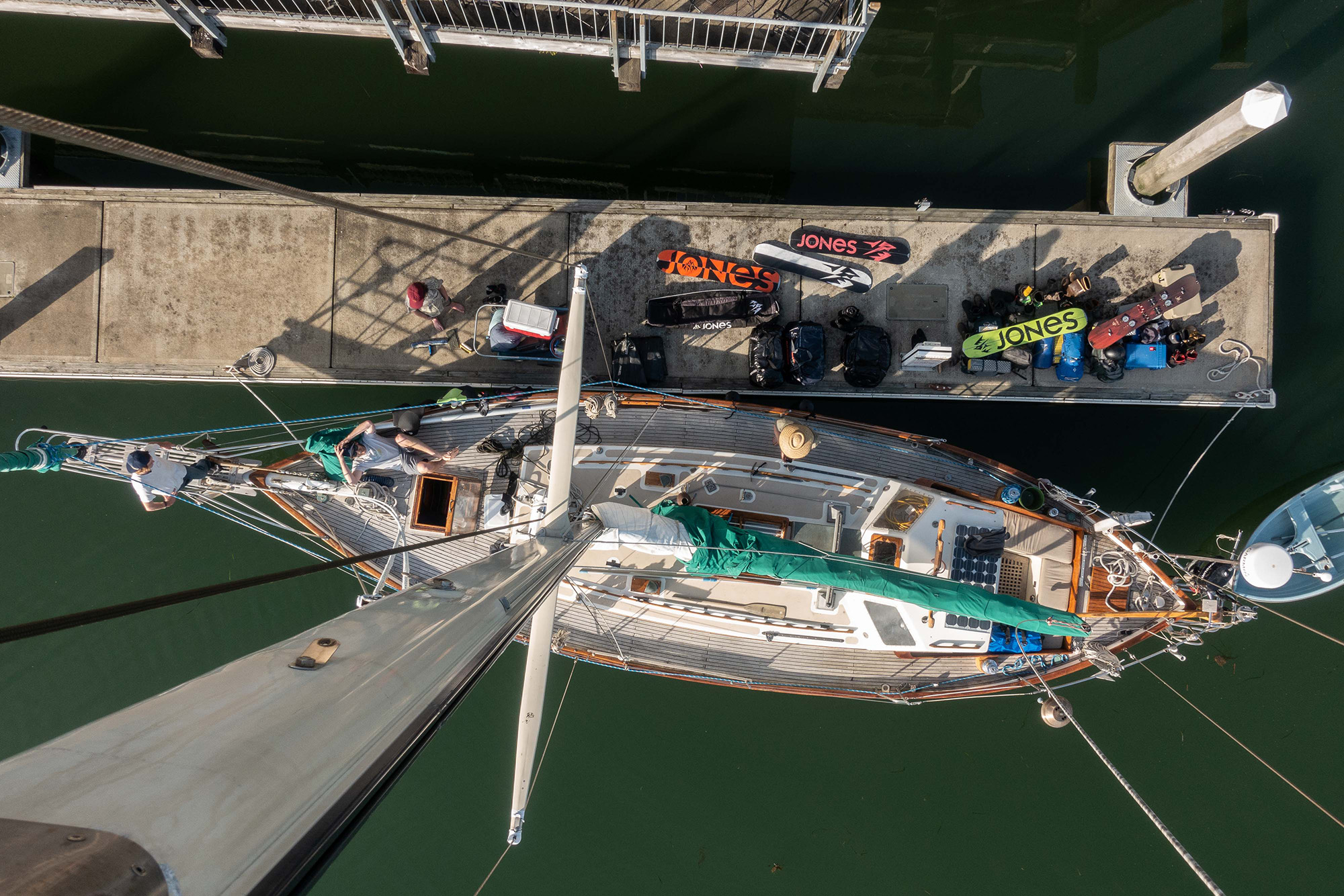 Despite the tangible excitement aboard Lucia on our departure morning, the conditions were tranquil. A burning sunrise came from behind Mt Baker as it towered over the calm waters of Bellingham Bay. All crew was on deck; Captain John Taussig, Timmy Taussig, Jann Eberharter, Jerry Mark, and myself. It was slow going but gave us a nice transition to life on the water. We quickly learned to relish the moments where the motor was shut off and the sails were raised. Things got more exciting when we crossed the border and had to cut through the busy waterways in front of Vancouver. The Fraser River meets the Pacific Ocean there, and besides dodging ferries and tankers, we had to watch for huge logs that the spring runoff had deposited in the Strait of Georgia. 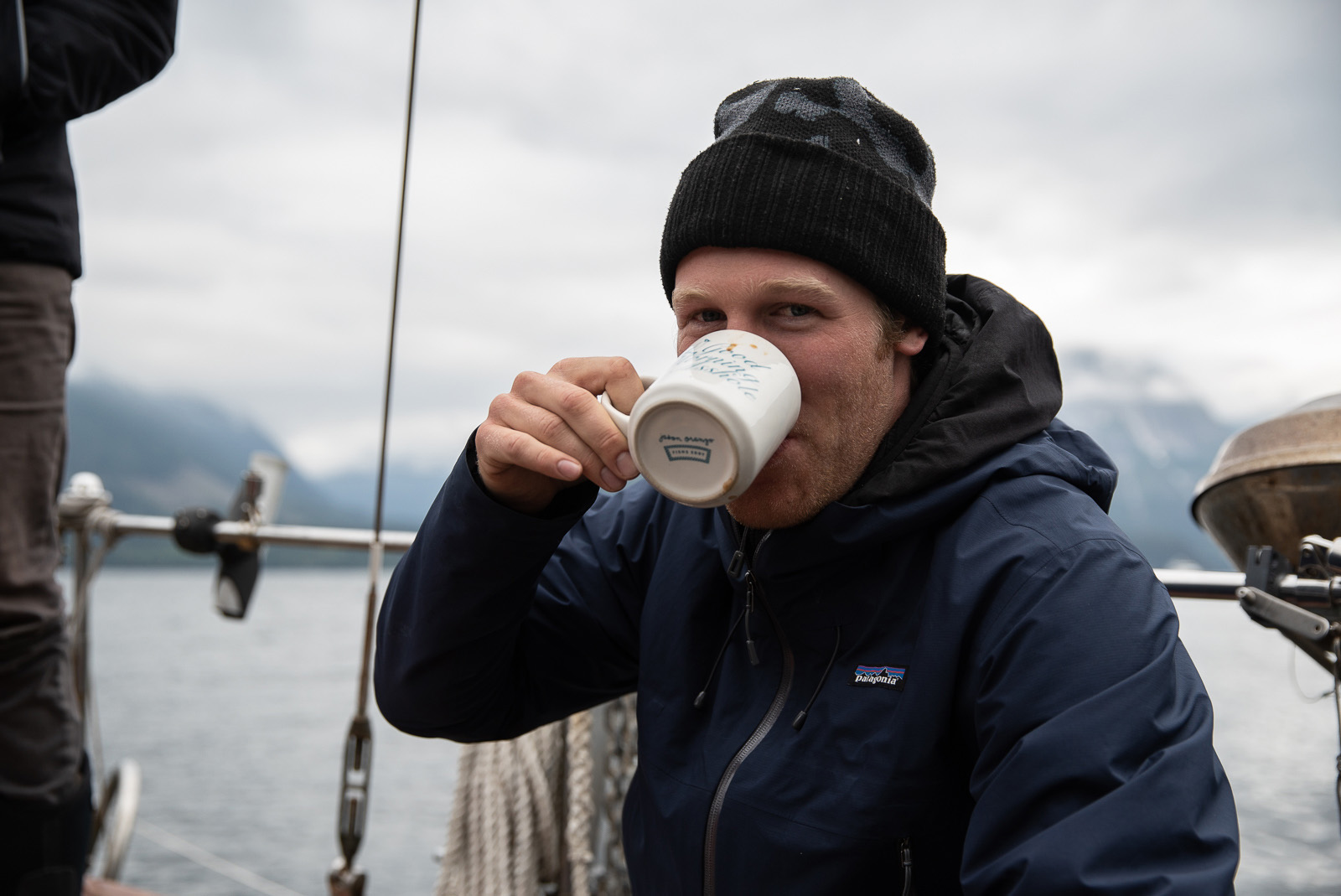 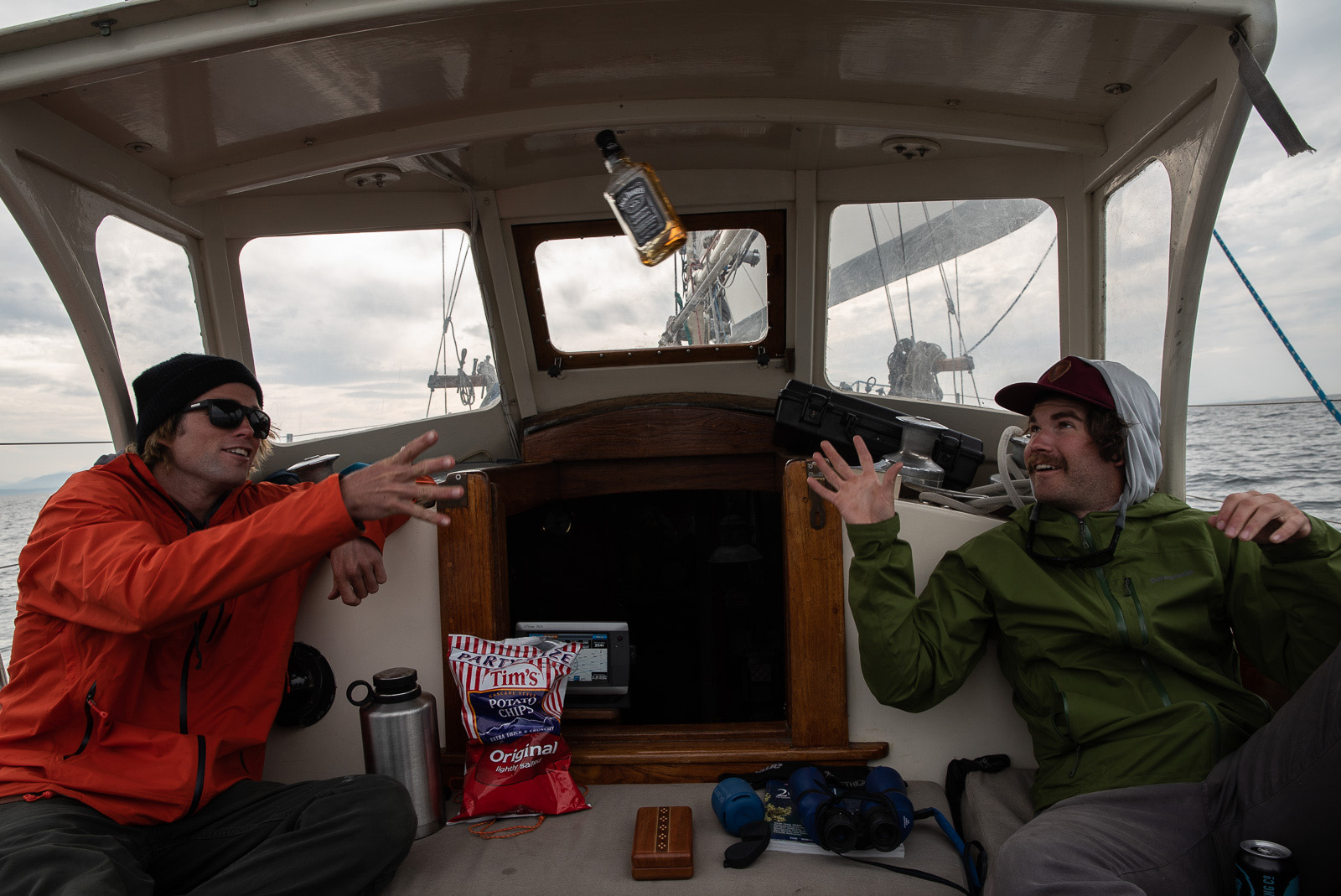 The sun went down and our sails were full as we crossed the Strait of Georgia and tacked our way towards the entrance of the Jervis inlet. The weather outlook for the next few days was good, and we wanted to maximize the promising forecast by getting there as fast as we could so we made the decision to sail in shifts through the night. Under cover of darkness, we witnessed some of the most vibrant bioluminescence any of us had seen as the spray from the bow and the wake glowed neon under a moonless sky. By the time I went to bed around 2 a.m., we had slipped through a gateway channel into the Jervis Inlet. 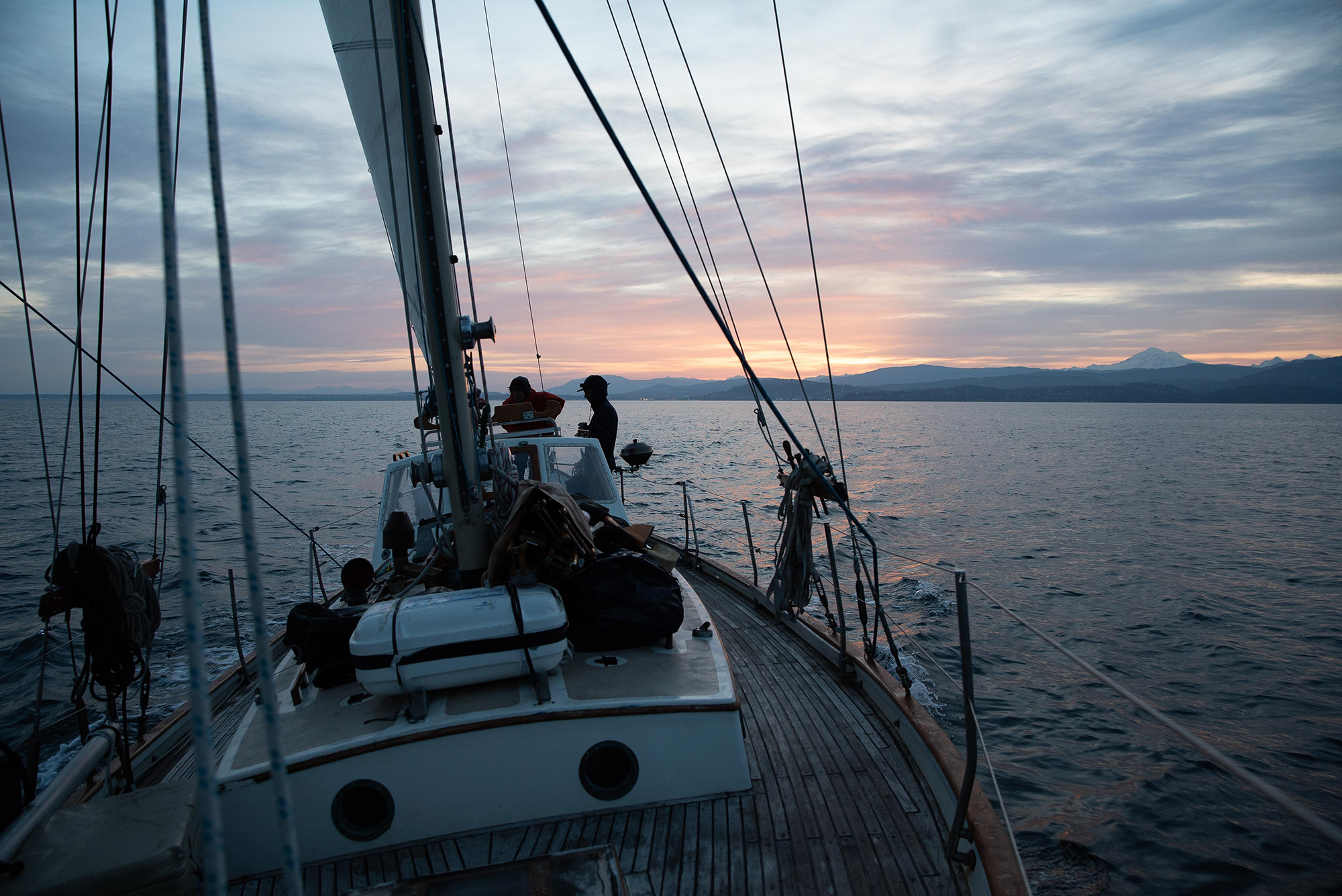 Jerry and Jann sailed us through the remaining dark morning hours. When I woke up we were rounding the last corner of the Inlet. A low ceiling veiled the alpine from our sight, but the place was captivating. Steep and thickly forested walls plunged from the clouds into the ocean. The wind had died, so the only sound besides the faint crashing of cascading waterfalls was Lucia’s gently purring motor. We loitered in the Jervis Inlet until we could safely pass the Malibu Rapids that guard the entry into the Princess Louisa Inlet. The tide shifts there force huge amounts of water through the Inlet’s narrow mouth, so we passed that afternoon between the tides. The Princess Louisa Inlet is narrower and even more dramatic than the Jervis, and everyone’s jaws hung slack with awe as we sailed into it’s folds. 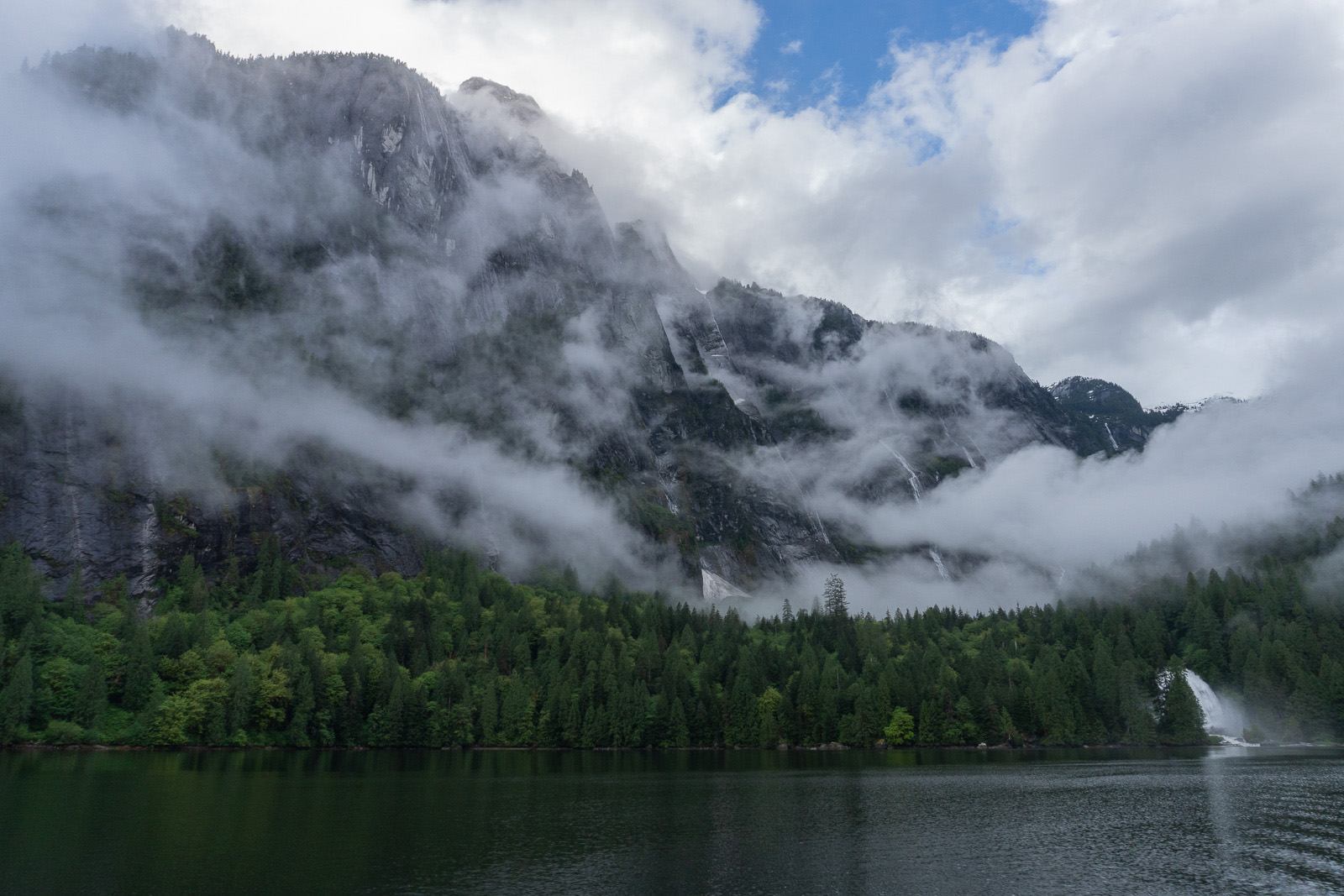 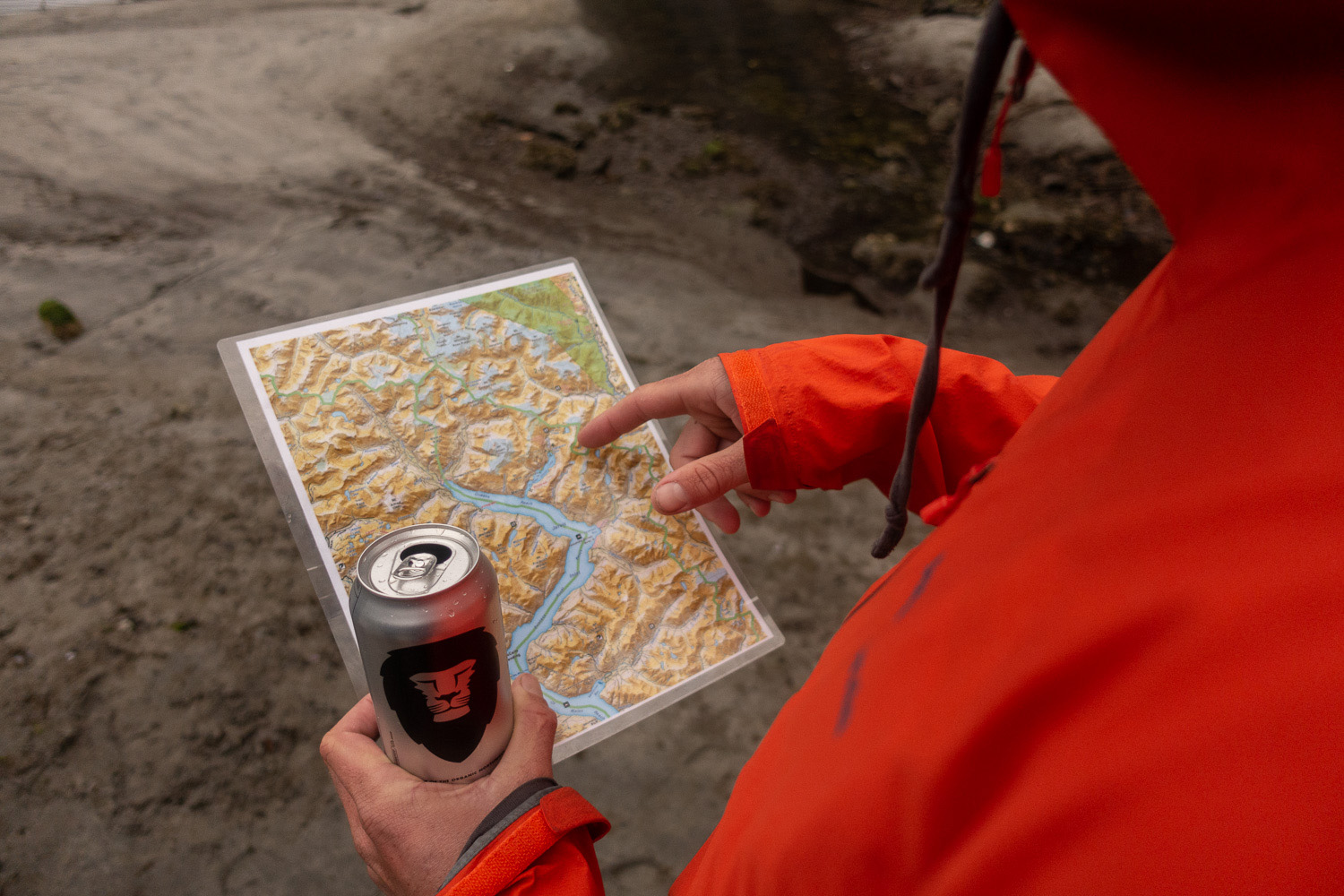 We docked at the terminus of the waterway, where Chatterbox Falls roars into the ocean beneath Yosemite-sized granite walls. Harbor seals surfaced and watched curiously as we exploded gear onto the dock to organize for the next day. There was a feeling of uncertainty amongst the crew as we went to sleep on our last night aboard Lucia for the next four days. First, the cloud ceiling never lifted, so we hadn’t seen any rideable snow nor any evidence of a supposedly improving weather window. Second, our trail to access the alpine was lightly defined, and despite our research before-hand, we didn’t know if it would continue all the way to the snow. Regardless, we were ready to strike to the alpine the next morning. 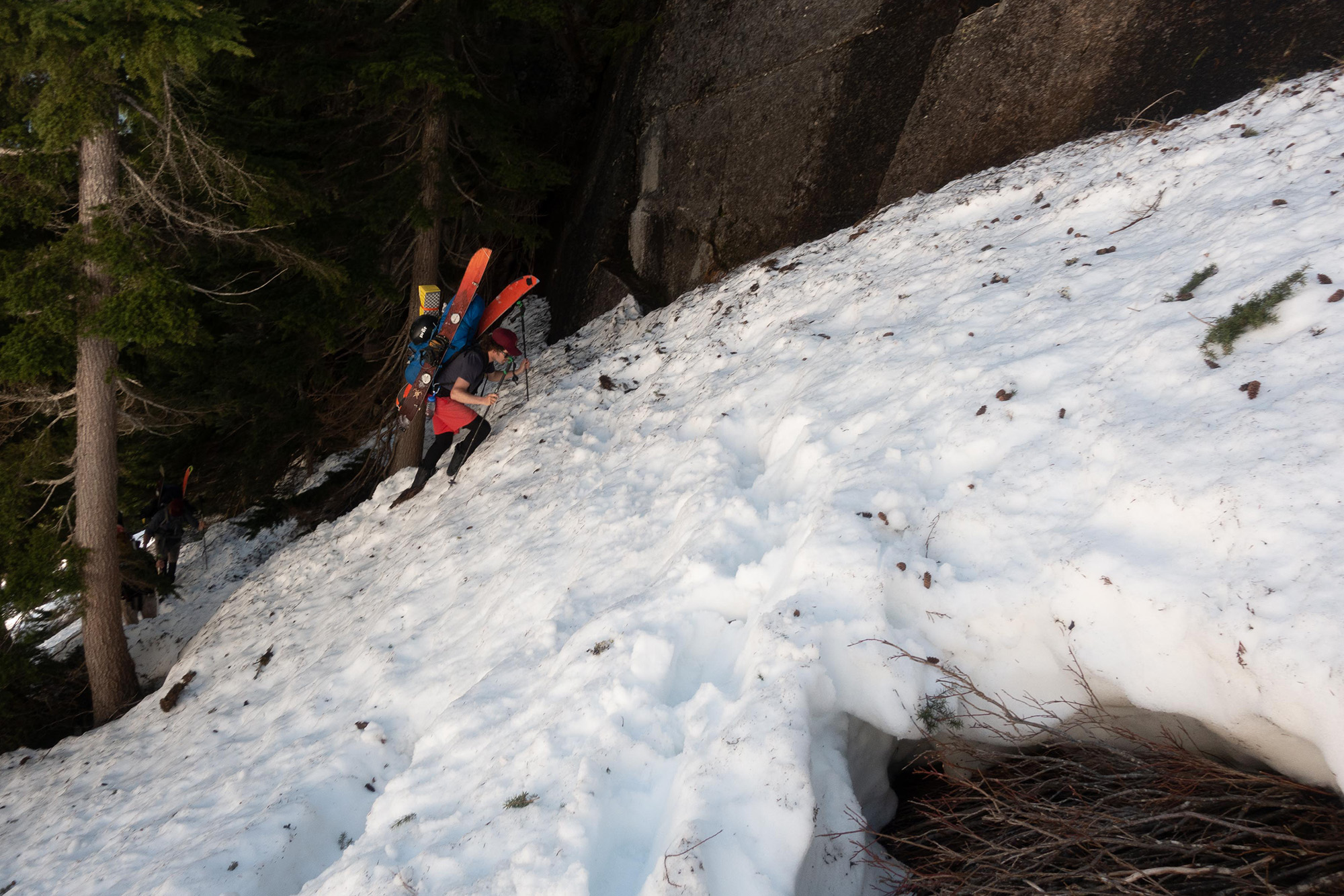 Sunrise came with our first good omen: clear skies. We could see snow now, perched high above the towering walls of the Inlet. With our hopes a bit higher, we began the ascent. It was nothing short of absolutely grueling. The trail was easy enough to follow at first, but disappeared except for sparse flagging a third of the way up. From there, we bushwhacked between the flagging, through cracks in sheer cliff walls, and at one point with the aid of a fixed rope someone had left behind. When we finally crested the lip of the Inlet wall we found snow, yet it would be hours of nit-picky splitboarding before we could make camp. Rounding one last forested corner, we finally came upon a huge cirque of granite and snow. Nestled in the cirque was a frozen lake where we set camp just before the sun set. 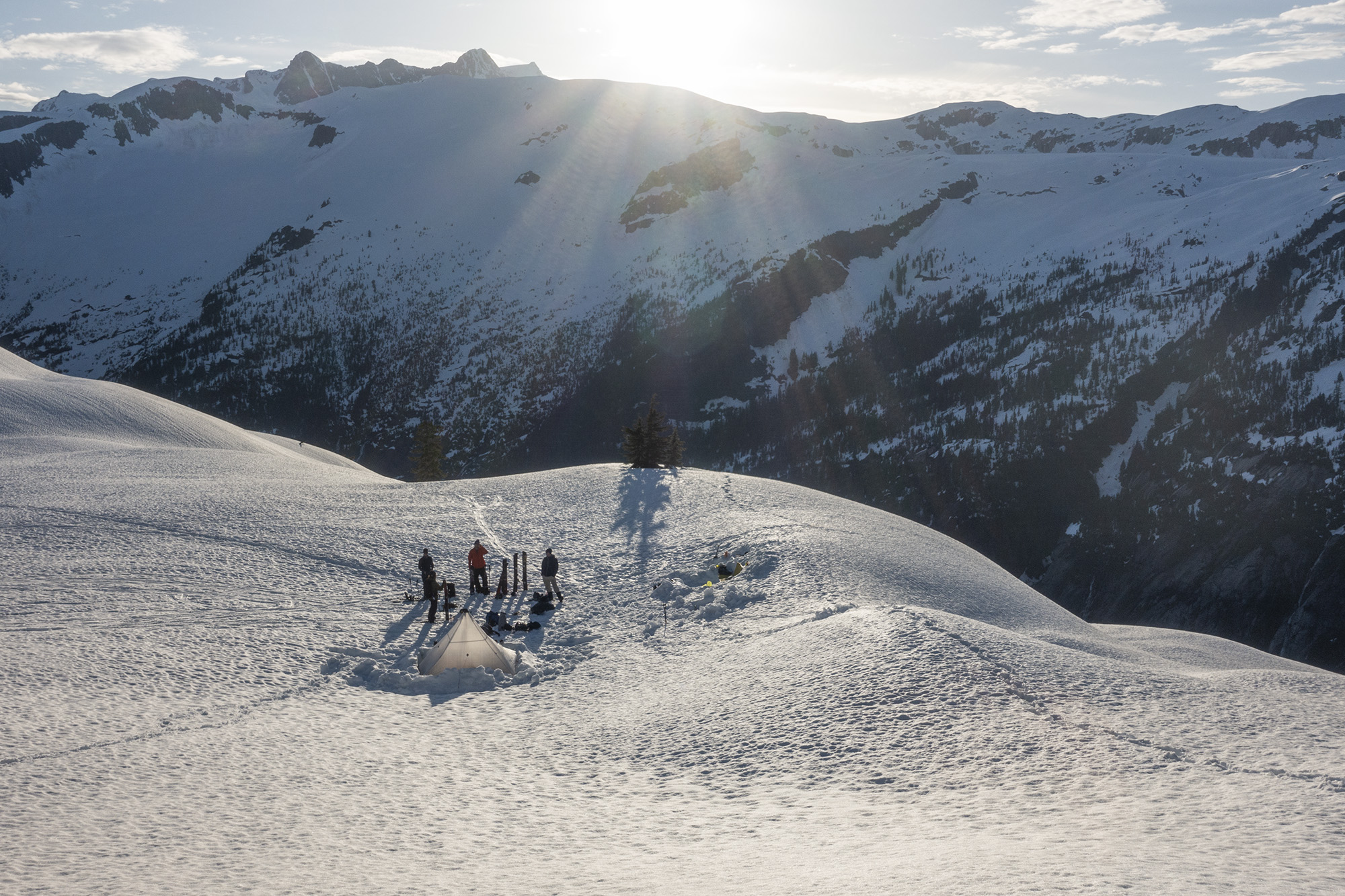 Rain came during the night. Clouds and moisture lingered around us through the morning, so things started slowly. It wasn’t long until everyone became too restless in the presence of these new and grand surroundings, so we defied the weather in the name of a few well-earned turns. Seemingly in reward of our defiance, the clouds parted as we started hiking. Our goal of scoring some sweet first turns was to be realized with sun-burned grins. We took turns lapping the rolling ridgeline above camp, looking over the edge back towards the boat while we slashed around in the soft corn. The day culminated in a long ride in the sunset alpenglow, top to bottom from the ridge back to our lakeshore camp.

We had spotted a nice couloir through the trees on our initial climb up from the shore. With a closer view of the line from the ridge above our camp, the couloir became our primary objective. The next day we loaded up the packs and climbed back up to the ridge to then drop into the basin beneath the couloir and set camp. 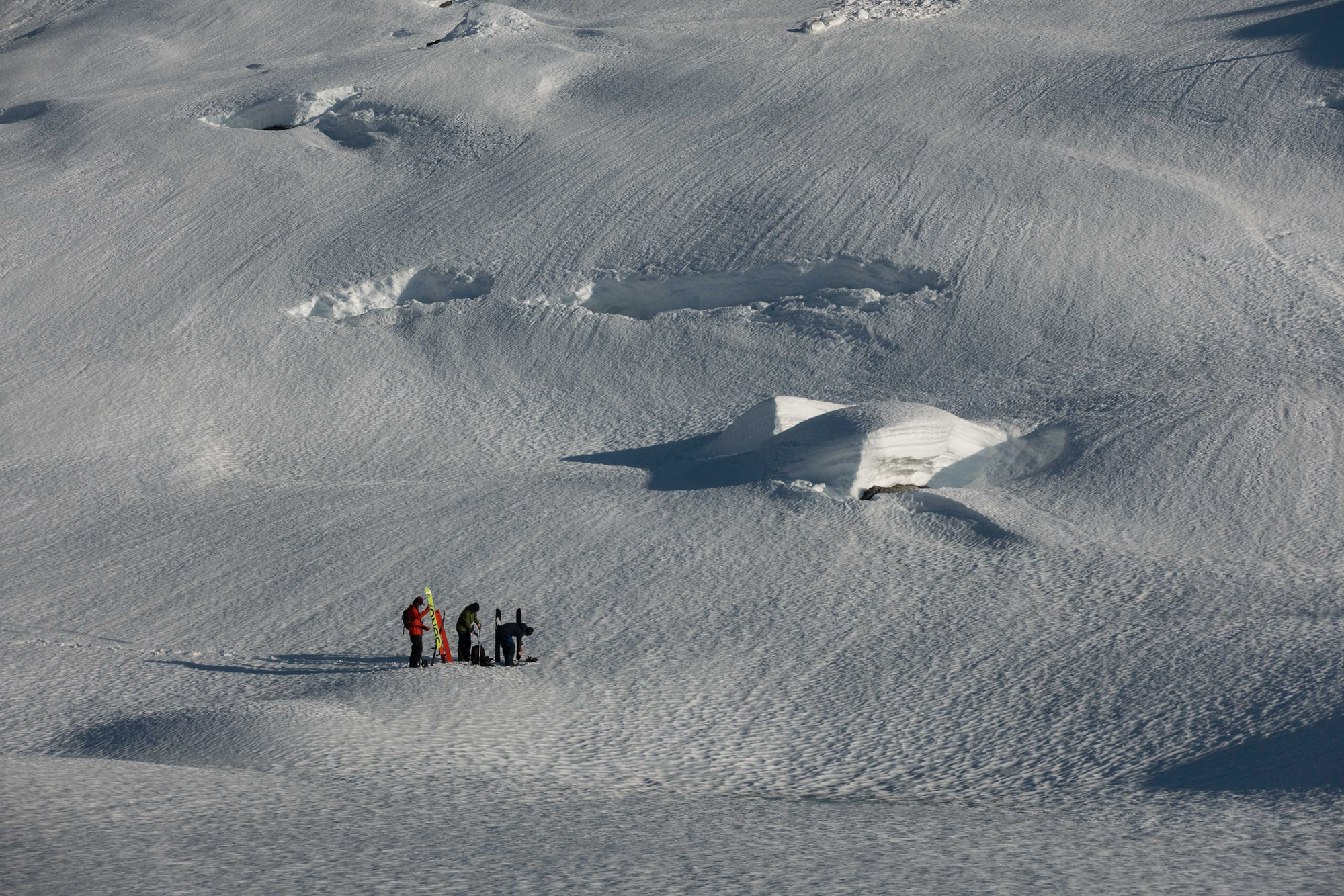 Treading lightly on the snowpack had become the general theme of our climbing and riding. The snowpack was not freezing at night so water ran under the snow 24 hours a day. We watched huge glide cracks open and widen throughout the duration of our trip revealing a slick grey granite bed surface. We steered clear of any touchy spots, careful not to encourage any releases. Our couloir was a lucky find. It was shaded most of the day, and there was no evidence of weakness in the snow there. The relatively steep line would be a welcome change from the lower angle turns we had been confined to the previous day. 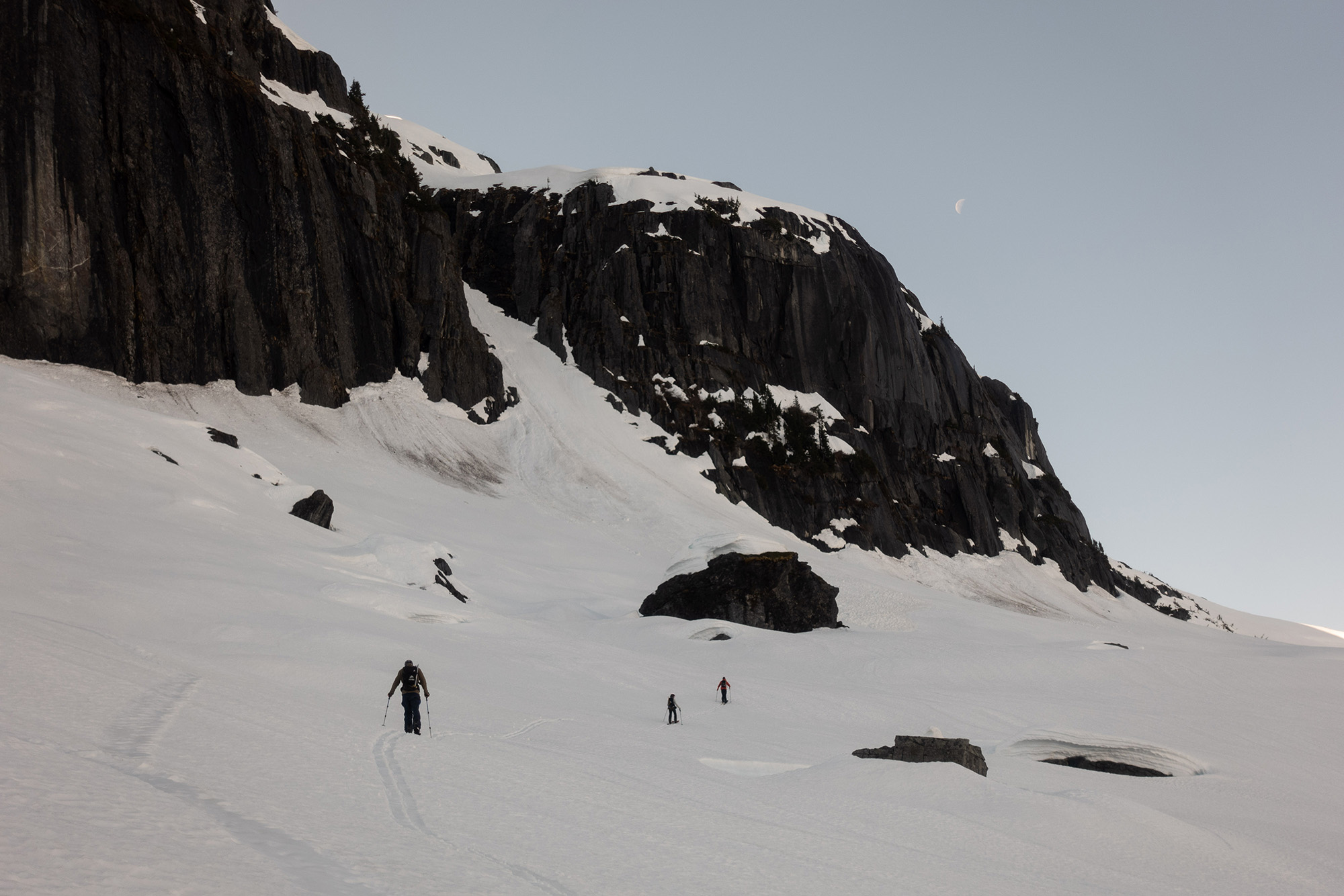 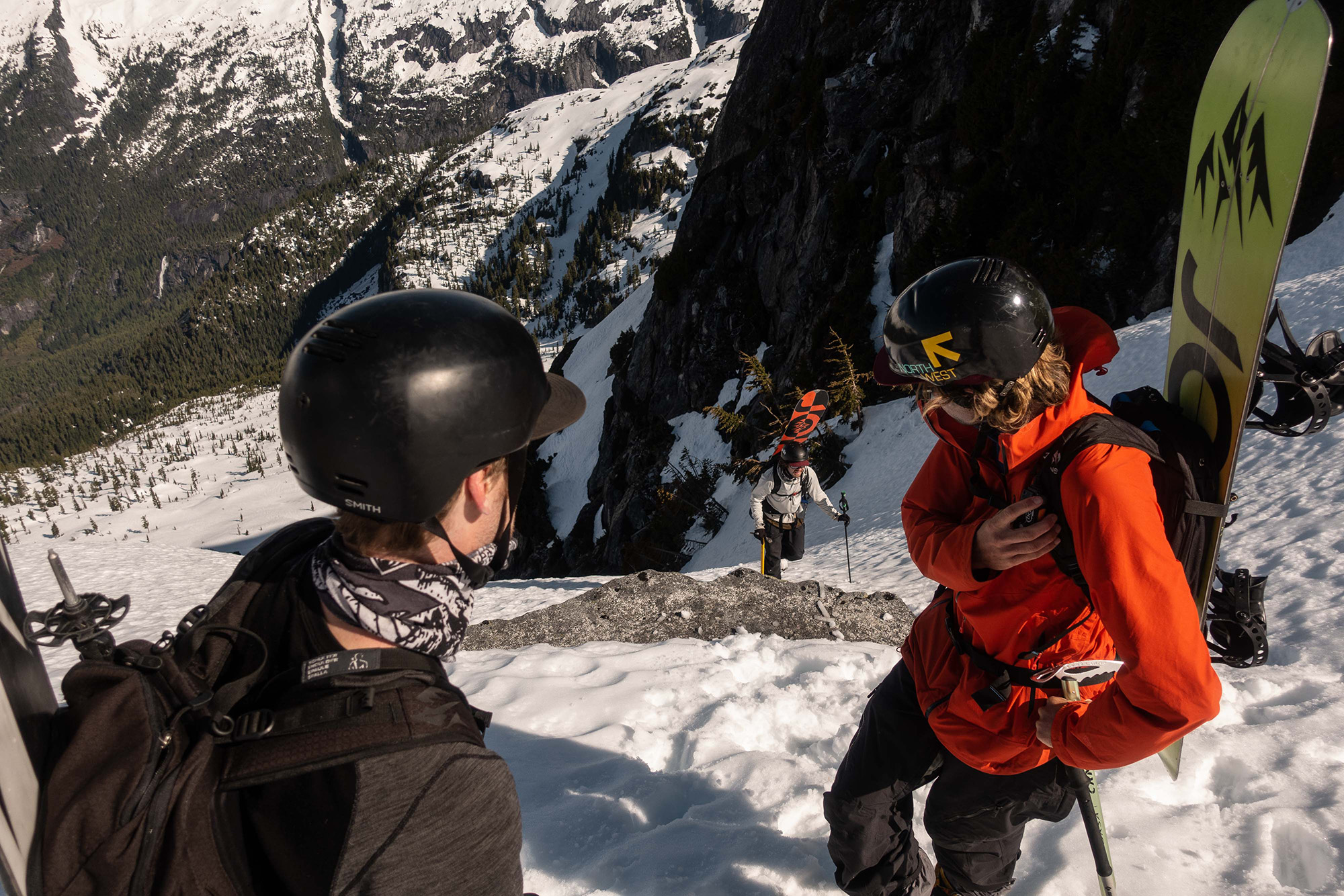 On our fourth and final day in the mountains, we struck out to the trophy couloir. Things stayed solid during the approach, and the climb went by as quick as we could muster. As we climbed our senses were tuned to detect temperature changes and sloughing snow or rockfall. We topped out and were treated to a full scope of the landscape. Surrounding us were the sharp peaks of the Coastal BC Mountains adorned with some of the largest glaciers in our planet’s temperate latitudes, all perched neatly above the winding reaches of the Pacific Ocean. As tactfully as we could, we made the descent, savoring every hop turn on the steepest safe angle we had found. Hoots and hollers reverberated from our granite surroundings all the way back to camp. 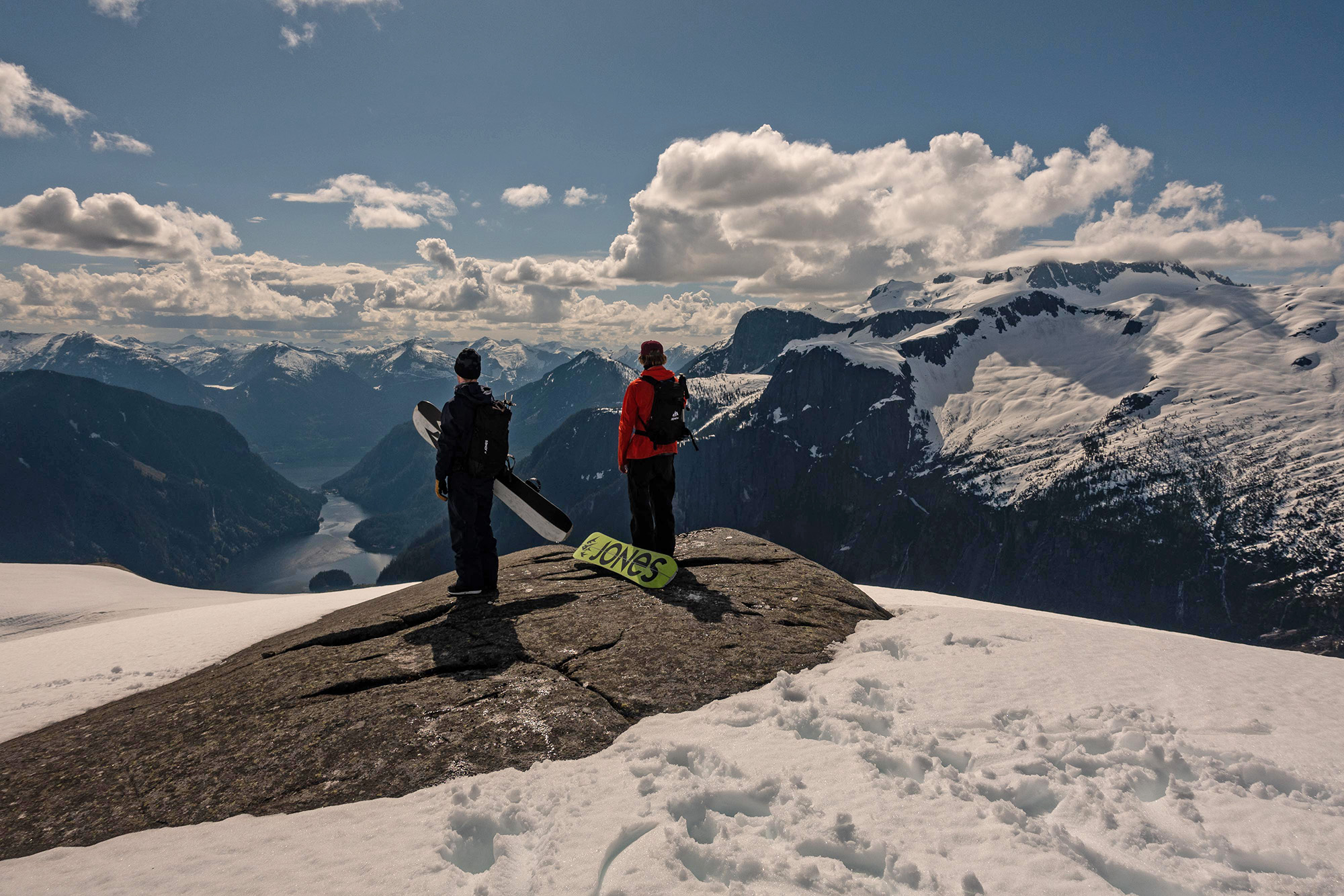 A dwindling food supply encouraged our decision to pack up and head back to the ocean. The descent back to the boat passed much quicker than the initial climb, yet took a much greater toll. By the time we reached the boat I was destroyed, but a few beers and a well-prepared meal proved to be the right remedy. The atmosphere in the inlet was also pure bliss as the last sun rays set the inlet on fire while a warm breeze pushed across the water. 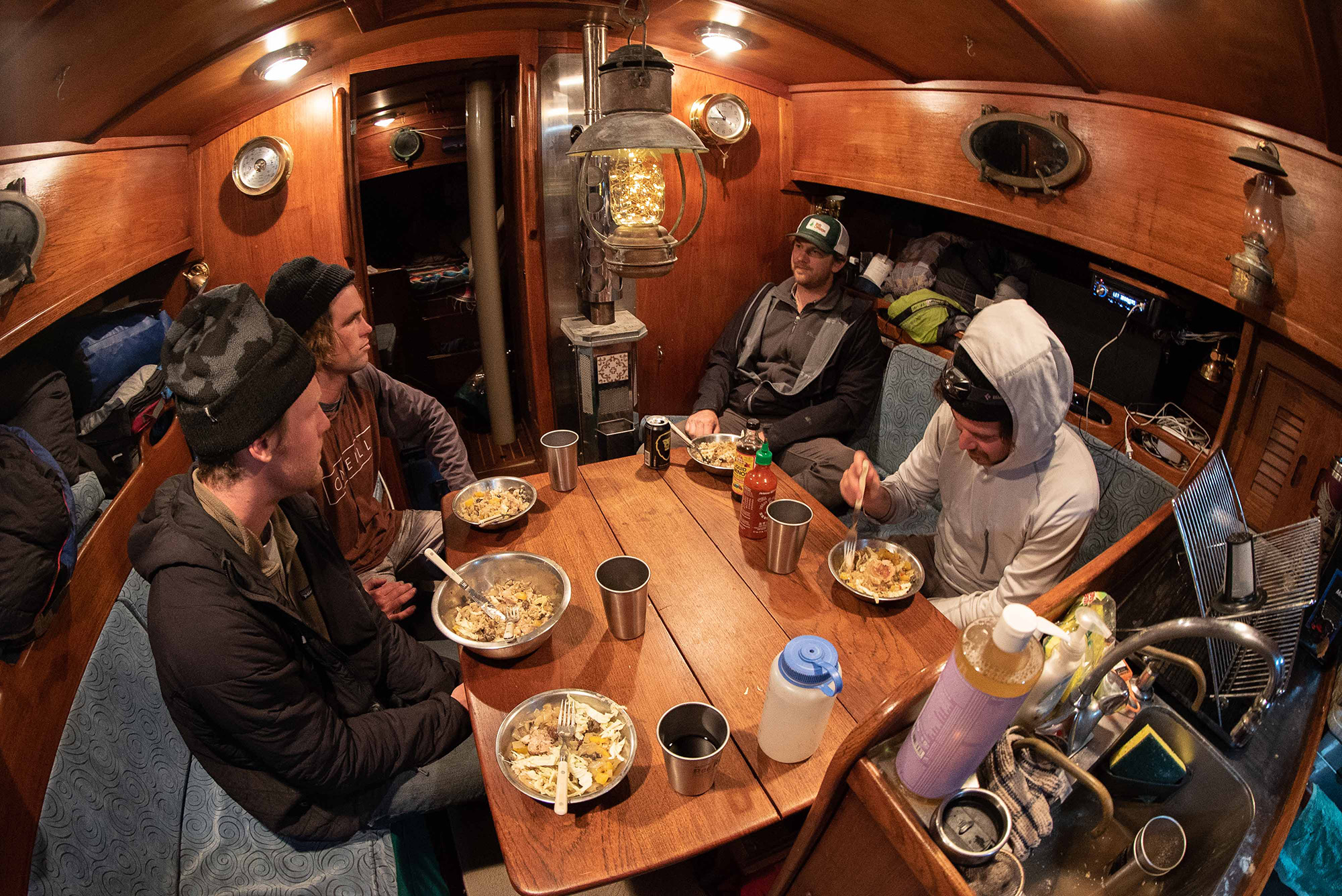 After dinner we checked the radio for a weather forecast. The high pressure we had enjoyed was set to move out with a possible storm moving in. The unforgiving access didn’t leave us with much option for another quick alpine strike before the weather moved in so we decided to start the sail home. The coming weather ended up being a blessing as the wind was just right to sail most of the way back to Bellingham without using the motor.

It’s not often that a trip is faced with as much good fortune as we had, and we counted our lucky stars the whole time. To experience the unique proximity of the mountains and ocean in such an immersive way left me with a much deeper love for our special corner of the world. No doubt this feeling will last a lifetime and I can’t wait to set sail again for another epic adventure aboard Lucia. 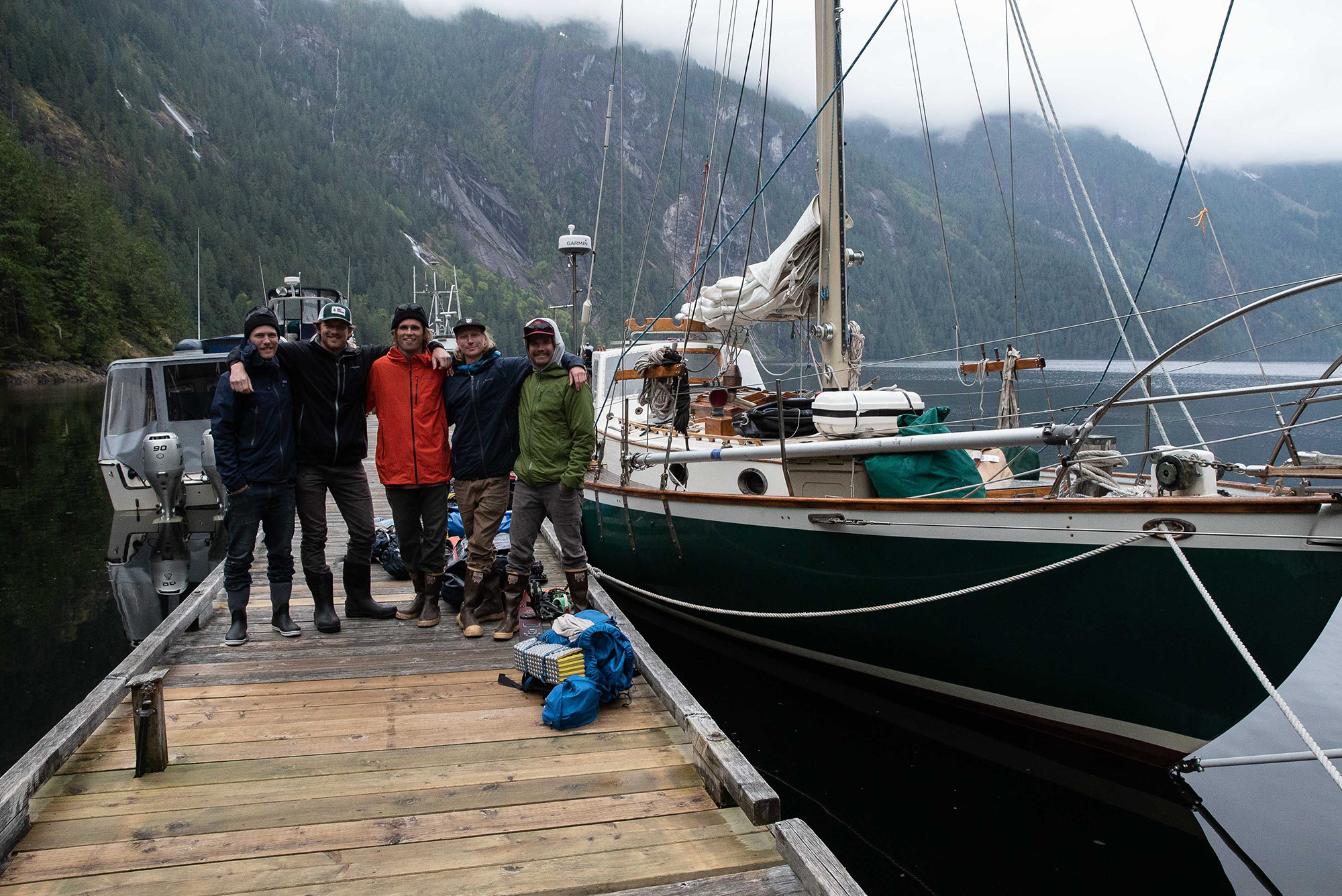