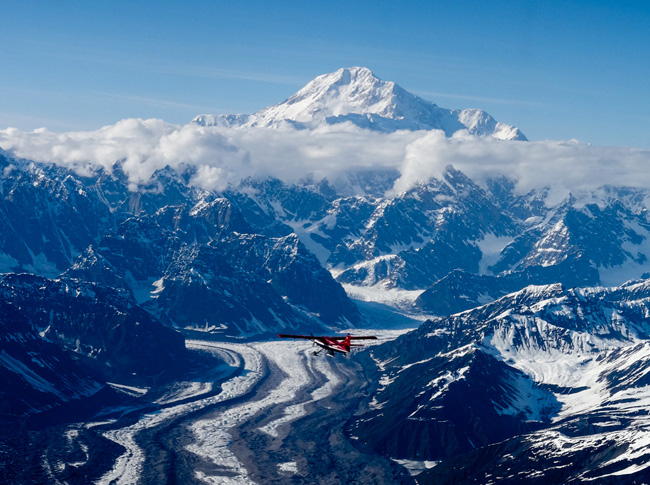 Story and photos by Jeremy Jones

“By the way, do you want to come to Denali in June? I am going with my son Max, some of his friends and a few of mine. No camera crew…full vacation.” – Conrad

Denali had never really been on my tick list. Assuming the peak was crowded, wind hammered and didn’t get much fresh snow above 14k, I had never been very inspired to ride it. But this was an offer I couldn’t refuse. To get an invitation from none other than Conrad Anker, one of the world’s most accomplished alpinists was a true honor.

But what put the invite over the top was the “no camera crew…vacation” part of the email. For the last few years I have been leading a large production crew on multiple intense trips to unknown places each winter. A “love of sport” adventure was just what I needed. And what better way to see North America’s biggest mountain than with a diverse group that I had mostly never met.

The plan went next-level when the dates matched up perfectly with an Alaska vacation I had planned with my family. What a month in Alaska this was gonna be!

First Impressions Comprehending the scale of Denali is a hard thing to do. My first close view came from Talkeetna. Coming around the corner the first peak I saw was Mt Hunter (14,500 ft). I thought it was Denali and was blown away. When Denali finally came into view I was absolutely astonished. Rising 19,000 vertical feet above me, the peak filled the sky line like no mountain has ever done for me before. 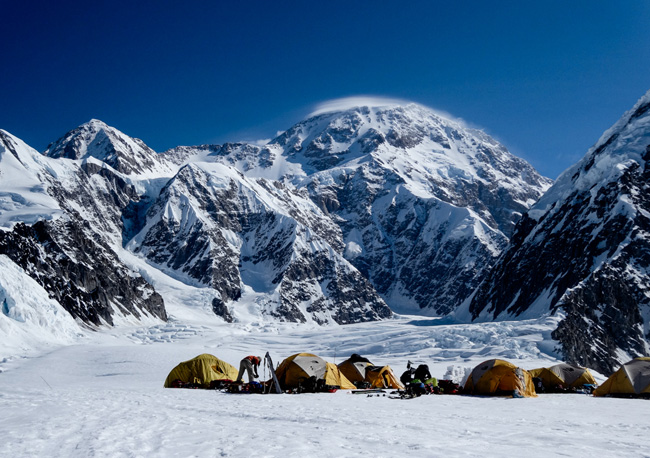 13,000 feet to the summit from camp one on the Kahiltna Glacier. 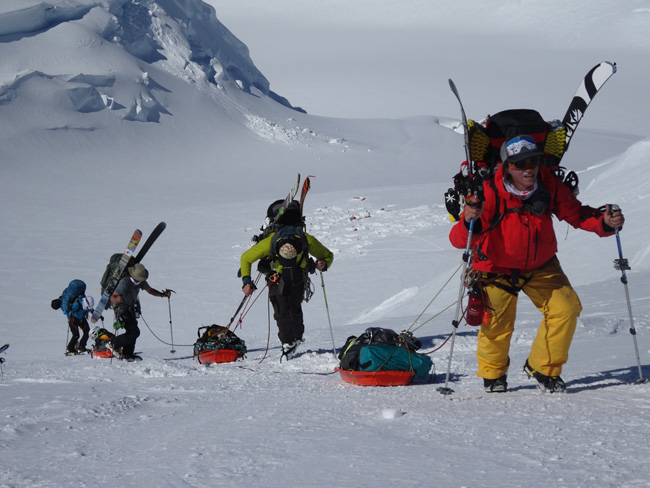 Ralph Backstrom and the crew haul their sleds up Motorcycle Hill with camp two behind us. 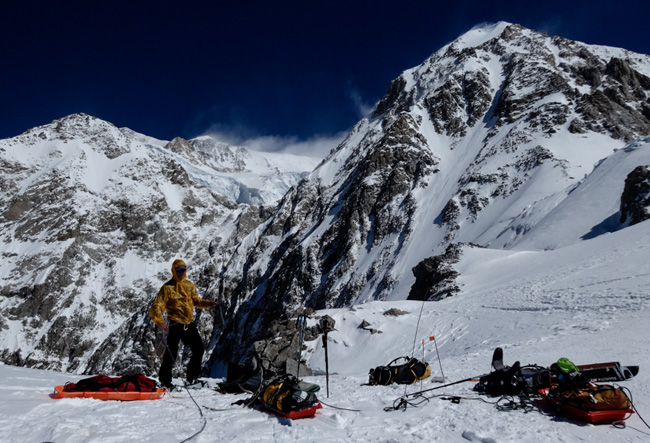 Jon Krakauer is an impressive mountaineer. He was one of the strongest guys on the trip and a ripping snowboarder. 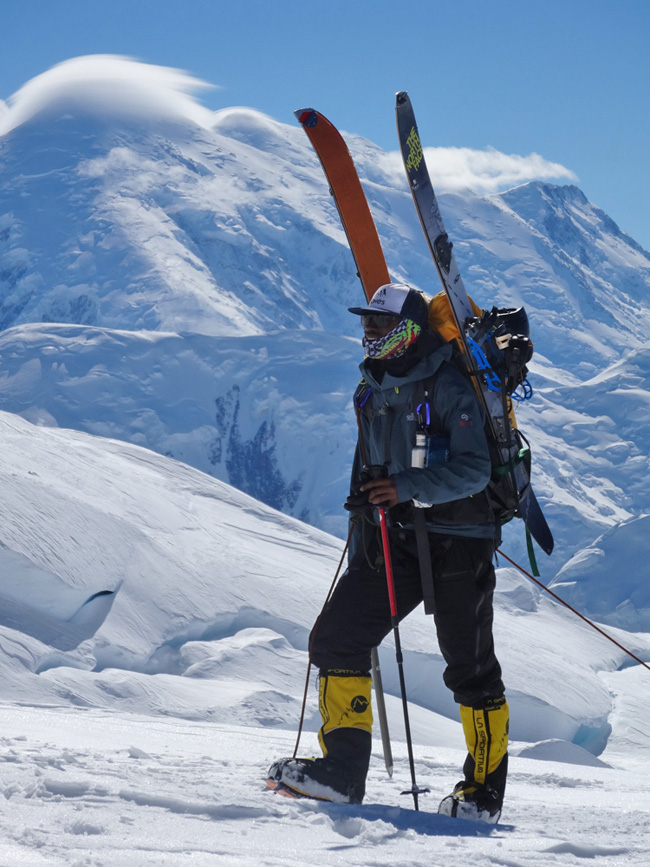 It was great to spend time in the mountains with Ryan Hudson. Amazing how far he has come from his urban roots. 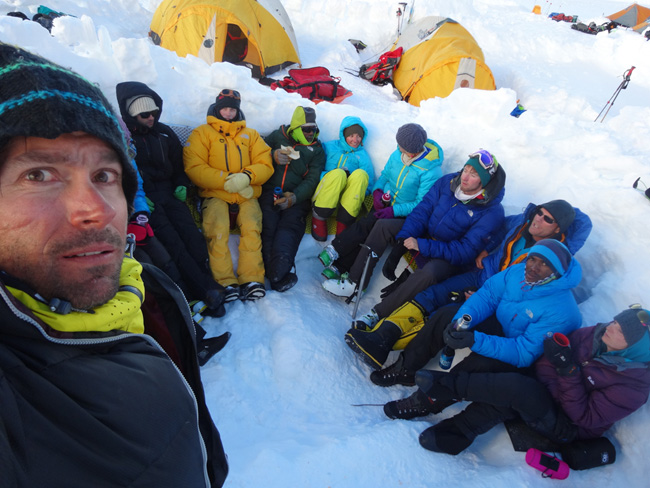 Loading up my backpack and sled at the airstrip was comical. The weight just kept coming until we all topped out around 125 lbs. The mountain greets you with a 5-mile skin with very little elevation gain to camp one. This is a great way to get to know your sled. Five days of hard and heavy hauling through the crevasses of the lower glacier (name of glacier?) and we finally arrived at the advanced base camp at 14,200 ft. The work was hard but the views of the huge and intimidating mountains were breathtaking. The trail was also incredibly well marked so my head was free to mind surf the countless lines that revealed themselves as we crawled up the mountain.

I decided to take my chances, stay at 14k and go for the summit in a six thousand foot one-day push. I’d carried enough weight. It was time to go light and long. 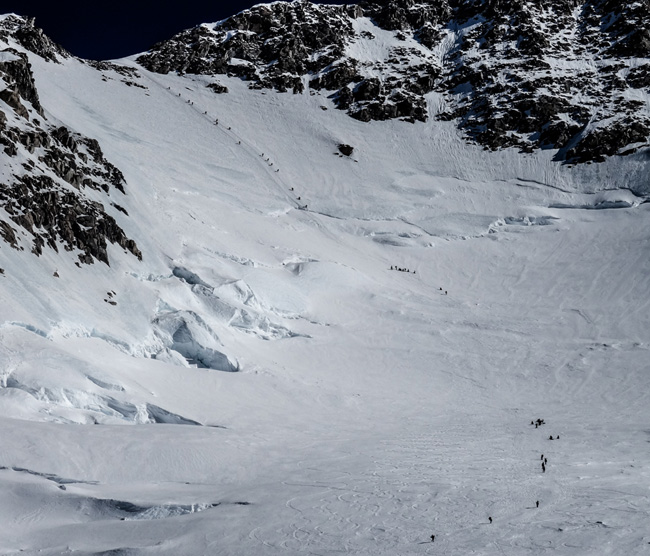 We were not alone. 450 people were climbing the mountain at the same time. 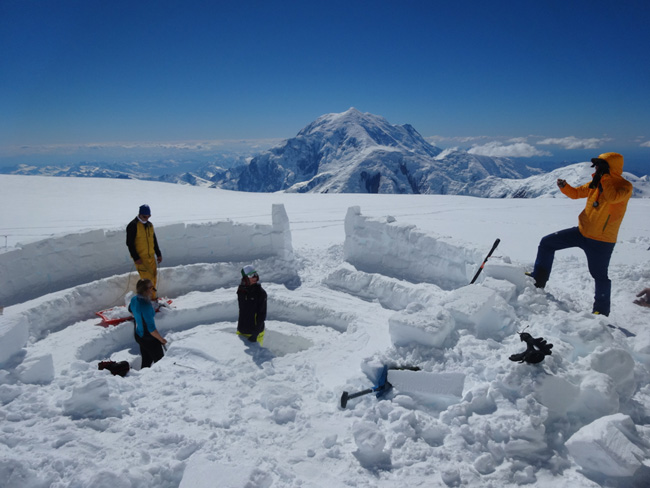 Conrad had his camp layout logistics dialed. We dug out the perfect measured foundation for the group dome tent.

Acclimatization day in the rescue Gully

Strapping into my snowboard at 17,200 ft to ride the Rescue Gully was the first time I really had to focus in my previous week on the mountain. Most of the mountain above 14k was blue ice or sastrugi so the riding was really challenging. The first 200 feet of the gully was narrow and undulating making it hard to get my full edge on the snow. I more or less down climbed with my axes in both hands and my toe edge in the snow until I made it to the main face. Conditions on the main face where manageable, but we took it carefully as we didn’t know what conditions lay below us. Our fear was hitting un-edgeable snow and not being able to self arrest. The pick of my axe was never far from the snow on this run. 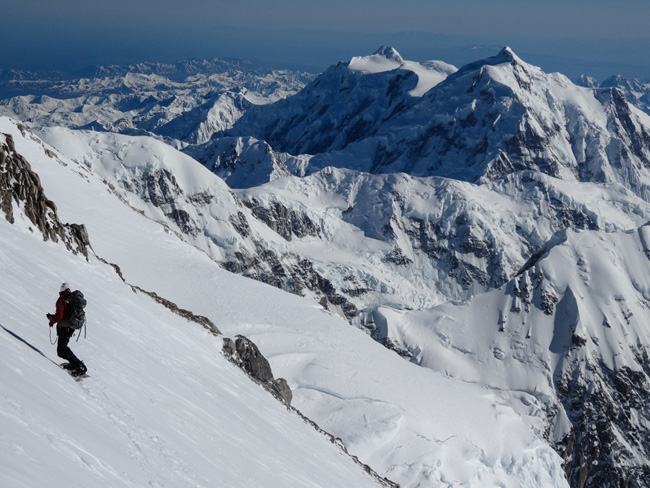 Robin Hill rides into the main face after negotiating the sketchy rescue gully.

For the entire trip I had figured we would climb the West Buttress – the main route to the summit that had fixed lines set up on anything over 45 degrees. That night going to bed, for the first time on the trip, Conrad mentioned taking a different line to the summit! Conrad’s unexpected words carried serious intensity with them. For the first time of the trip I did not fall asleep the second I laid down.

The Orient Express was definitely the best line to ride down and if I wanted to ride it I would have to climb it. There was no other way of knowing whether the face was covered in un-edgeable ice. But once I climbed it the riding would be more straightforward. What would it be like if I was stuck front pointing on my crampons for thousands of feet on blue ice that I couldn’t ride down? I also wondered what effect the elevation would have on me? 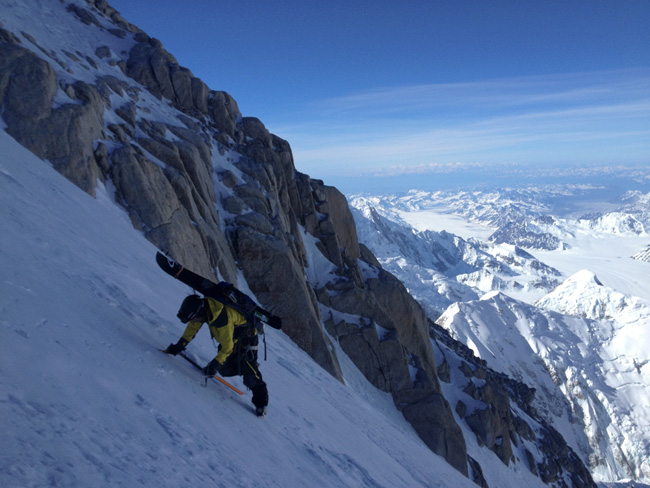 An hour into the climb I felt horrible. I accepted that today may not be my summit day. I was only getting half breaths and I was only at 15k.

“Go slow, but do not stop,” I told myself. Next thing I knew I was at 17,000 ft, half way up the biggest face of my life, and I couldn’t have been happier. Four hours later and we were hooting on the summit! 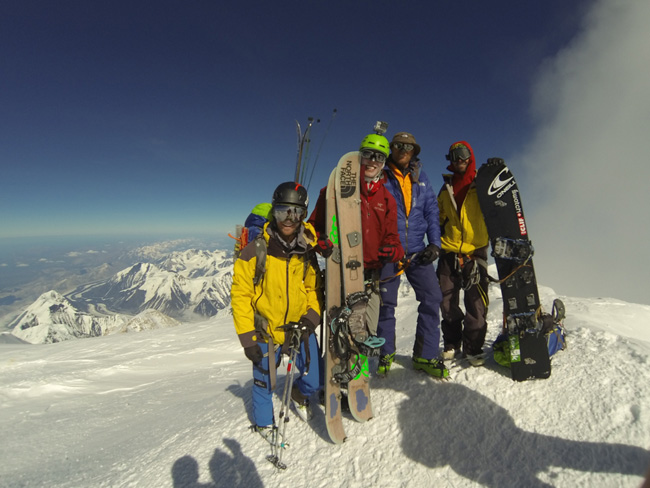 On the summit at 20,230 feet with Brody Leven, Robin Hill and Conrad Anker.

Dropping off the peak into the uneven and hard snow was when I really felt the altitude. I had to stop every couple hundred feet to catch my breath. It was a crazy feeling – I was light headed but it felt like I was still thinking straight. Or was I? Self doubt filled my mind as I made my way across the “football field” to the top of the Orient Express.

I approached the rollover to the five thousand foot face with extreme caution. It was in this very spot that people before me had slipped to their deaths. Axe firmly in hand, with full respect for the situation, I skirted the edge of the rollover. The bullet proof ice I had walked up two hours earlier had transformed into warm, edgeable chalk. Small turns got bigger, and before long, the wind was in my face and I no longer fought the gravity. We took turns riding 1,500 foot sections from one safe spot to the next, taking very little time in between stops. Rock fall was a serious concern due to the warm temps. Fourteen hours after we left, we glided to a stop back in 14K camp. 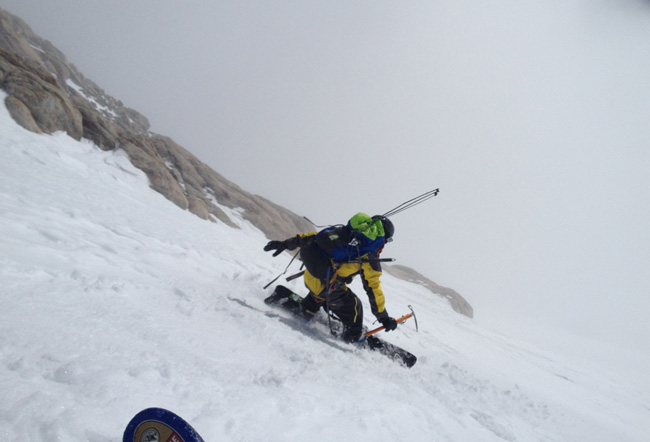 Near the top of the Orient putting the Ultracraft to the test. The warm edgeable chalk made for the best turns of the trip. Photo by BrodyLeven.com 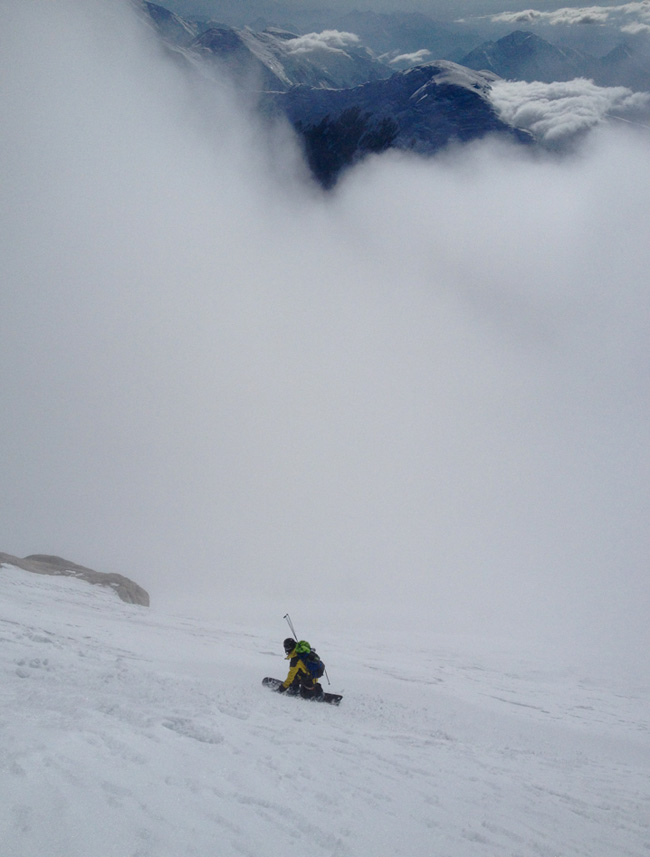 The weather moves fast in the mountains. This cloud came in for ten minutes, then cleared out. Photo by Brody Leven. 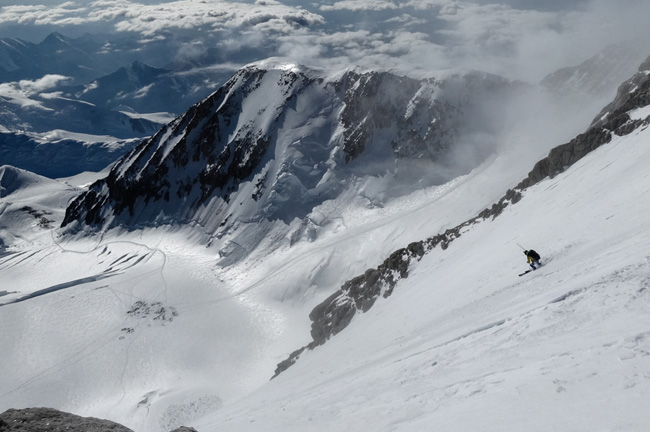 The Orient Express couloir drops 5,000 feet to the glacier below. The top was near 50 degrees and the slope never backed off from around 40 degrees.

More Lines Hopes of riding more lines and making a bid at the North summit got blown away by the high winds that combed the mountain during the last two days of my trip window. I packed up my camp at 14K and headed for the airstrip. We left in the middle of the night so we were on the glacier during the coldest part of the day and the crevasses would be frozen. What took 5 days to travel on the way up, took 5 hours on the way down. 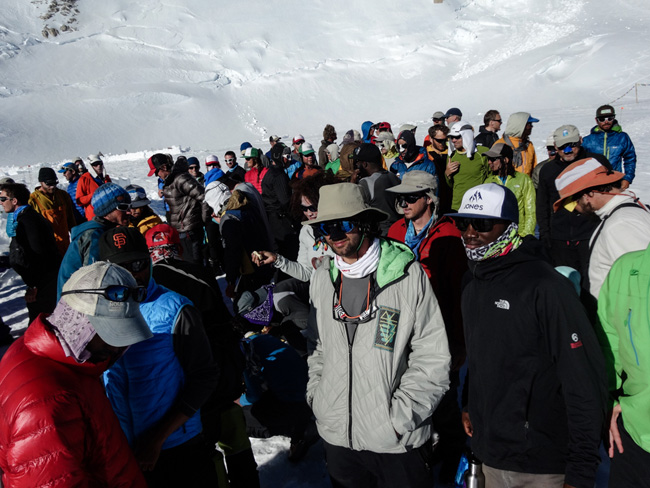 Conrad organized a party at Camp 2 to celebrate the 100th anniversary of Denali’s first ascent. 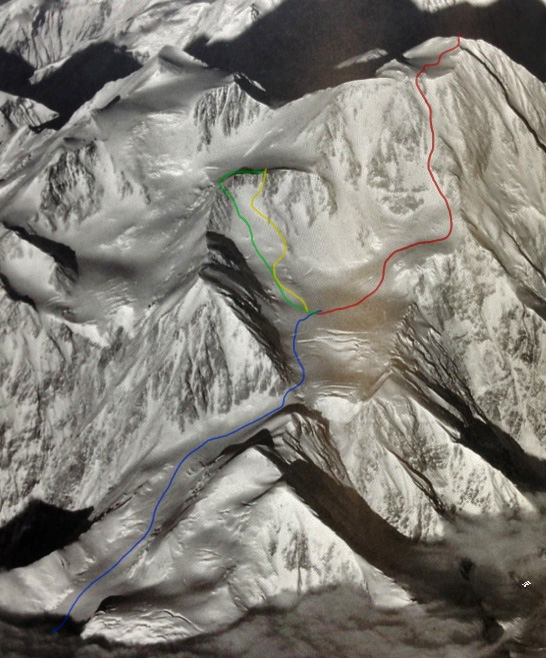 What stands out for me on such an epic trip? Spending quality time with old friends and making new friends. Watching Conrad move through the mountains while learning little and big lessons from him. Spending a dozen days surrounded by the biggest mountains I have ever seen. Never seeing the sun set. Talking to Jon Krakauer in depth about his books. Getting the best snow of my trip on the top of the Orient Express.

These are the things I will always remember! Thanks to everyone who was a part of this incredible journey. 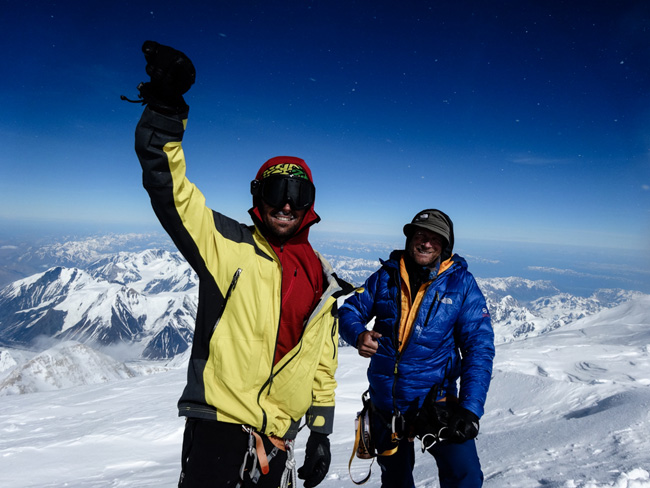 On the summit with Conrad. Thanks for the invite Conrad! Would never have been here without you.